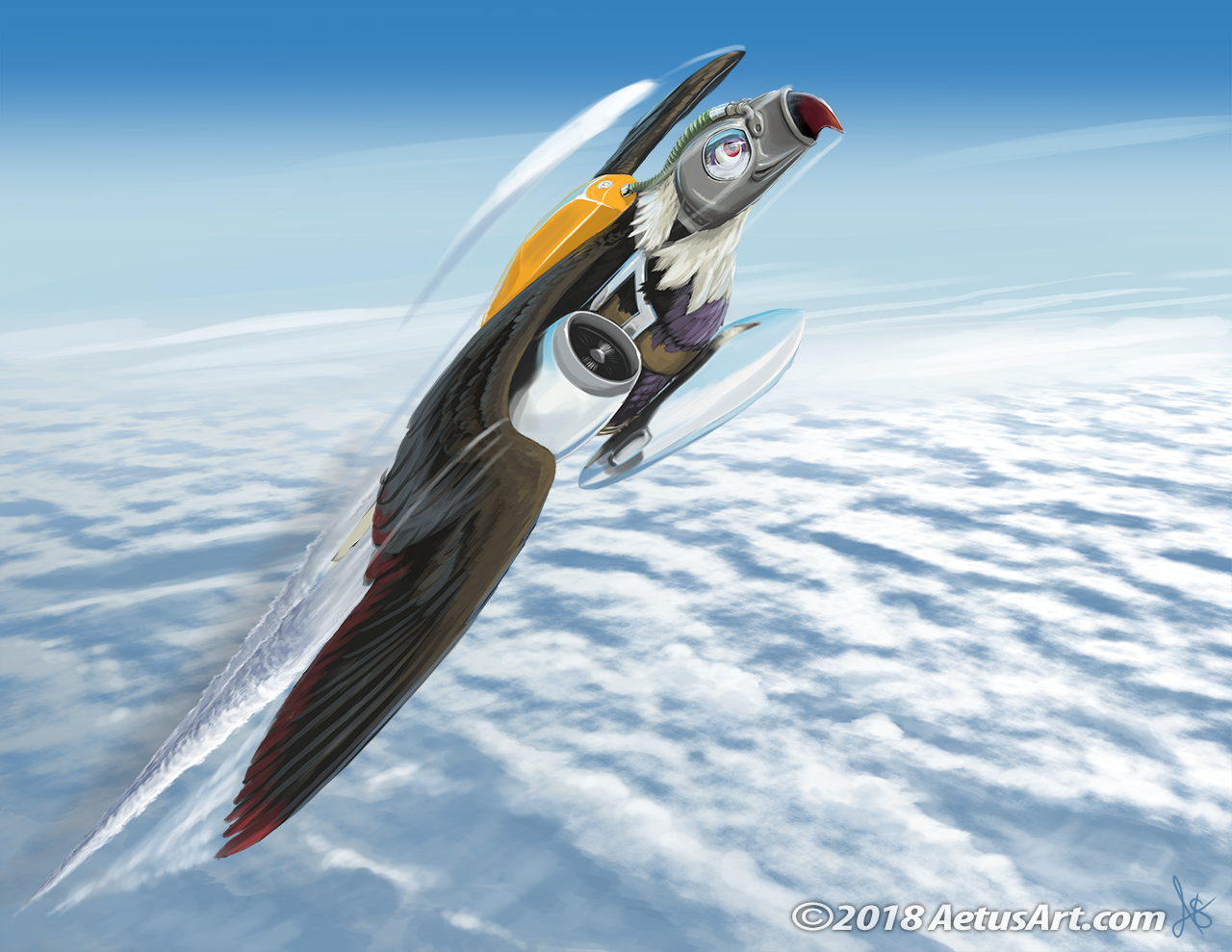 Sanya knew that eagles could do better than just flying place to place for food, almost always staying within a few thousand feet of the ground. The highest a bird had ever flown, a Ruppell’s gryphon vulture, was 37,000 feet (11278 m). Sanya knew he could do better but he needed a boost. It took a lot of work but with a lot of help he got himself fitted up with twin turbojet engines, a harness, and a droptank for fuel. Birds have a great respiratory system but he would be going far beyond any bird’s ability to glean oxygen from the thin air and he had to stay clear-headed. So he was also fitted with an oxygen mask and heating system to keep his mask from freezing up.

One silvery dawn, Sanya rode up to 10,000 feet strapped to the belly of a massive B-52. He made one last check of his equipment, and pulled the rip cord that dropped him into the blue sky. His jet engines spooled up in the slip stream as he pitched over and squeezed the control in his right foot. Black smoke belched out and the small jets screamed to life. He squeezed the control in his left foot and felt the hot exhaust rattled his tail and shove him forward. He pulled his head up and made a sweeping arc, just brushing 7,000 feet at his lowest point. He tipped up and squeezed the throttle further, the engines rumbling into full throttle. He quickly passed the drop crew and they waggled their wings in a wish of good luck. Sanya pushed through 350 knots, his vision blurring and whole body vibrating. He had to pull his wings in closer but not too close since the engines strapped against his body were hot. As he passed closer to 400 knots, the buffeting slowed and he could see clearly again. The air cooled and his toes became frosty. If he pushed his feet out carefully, he could heat them in the jet exhaust but if he didn’t do it symmetrically, he could whip into an uncontrollable spin that would rip his body apart. He had to hold on… just a bit longer.

Sanya chirped back confidently, “I can do better!” And he pushed on to 40,000 feet. Then 45,000, 46,000, 47,000. It took longer and longer to make further gains as the small engines were at the top of their performance envelopes. After several minutes and his fuel falling into the red, he barely made 50,349 feet before engine 1 stuttered. He quickly released the throttle and squeezed his right control again to shut the motors down. He couldn’t afford asymmetrical thrust at this speed. As the scream of the engines died and gravity took over, Sanya pulled the rip cord that released the fuel tank and engines. They dropped away, tumbling down towards the clouds far below. He flapped his wings but couldn’t maintain altitude. No matter, he had done what no eagle had ever done before.

Sanya enjoyed the crisp, cold silence and contemplated another record he could break. Setting his wings, he eased into what would be the longest glide of any eagle ever.

Story by Hal Aetus. This piece was a commission for a patron named Banter. Sanya is his character, a variant of a generic sea eagle. Please do not repost this image or story without the permission of the artist/author.