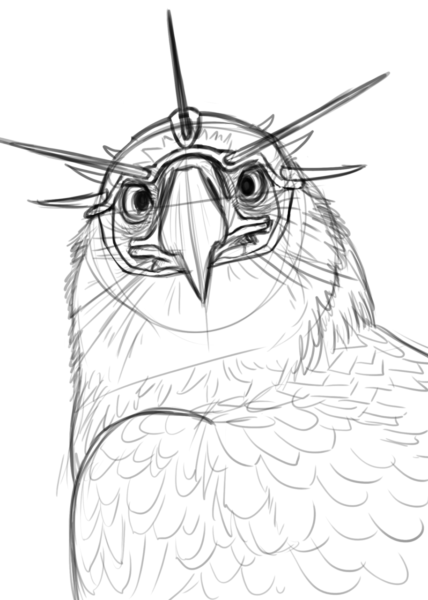 Whiterock is my next novel, aiming for release in 2022. I have it all written but it still needs polishing so I’m sharing it here, a bit at a time, to get your feedback. Have a quick read and tell me your impressions, or give me your critique, in the comment area below. Enjoy! (updated 14-Jul-2021)

©2019 Hal Aetus (aetusart.com). Please do not repost without permission of the author.

WARNING: There are some scenes throughout this novel that depict actions some may not consider suitable for children such as drinking of alcohol, mild gore and violence (as in close combat), romance, and mild sexual content. My target audience is adult (e.g., 18 years or older) so be advised.

Tristan was awakened by a beam of sunlight across his eyes as the sun crested the steep wall of mountains to the east. He shifted groggily in his bed of grass and shaded his eyes with a wing. The sky was brilliant blue, and it felt like the day was already a few hours old. He shook the dry poultice from his forehead and groaned. The headache had shrunk to a dull ache behind his eyes. He stood up and stretched in avian fashion, one leg and wing with half the tail at a time, and then, for good measure, both wings together over his back.

Nyx chirped above Tristan’s head and he looked up to see her perched above, bobbing her head and chittering encouragement out over the water. Pepro was flapping hard, coming towards them with a large, silvery trout in his talons. The fish flopped wildly and caused Pepro to wobble in flight. But he had the stern focus of a hungry eagle as he steered the fish’s head into the slipstream and regained control. In moments, Pepro flared and landed on the nest, the fish gaping its gills and shuddering in his grip.

Pepro smiled and chirped at Tristan, “I’m so glad to see you up!” He shuffled over, dragging the fish with one talon, lest it flop out of the nest, and gave Tristan a warm hug. “You didn’t get your special dinner last night. I kept it here, safe and sound.” Pepro pulled back a layer of moss and there was a dead marmot grinning back at them.

Tristan’s gizzard growled and he let out an eager churr. “Thanks, Peppy!” He sank his beak into the skin of the shoulder and began to expose the meat of his prey. With each swallow of the soft, rich meat, he felt stronger. In minutes he had consumed as much as he could, and he went to work feeking, or wiping, his beak and cleaning his talons.

Nyx and Pepro were still working on the fat trout as Tristan finished his meal. They kept eating while he walked around and surveyed his surroundings. He noticed that much of the moss in the nest was not deposited but had grown there and the edges of the nest were crumbling away. There were no fresh grasses or sticks, no feathers, and no prey remains. Tristan guessed that the nest had not been used for many years. He also saw an emblem carved into a bare part of the trunk, just above the nest. It was a fish shape with three stars above it.

Pepro could see his friend’s curiosity. “What do you think of Uncle Perro’s nest, Tristan?”

“It’s incredible. And this place is amazing too.” Tristan asked. “So this is where you learned to fish?”

“It is!” Pepro wiped fish scales from his beak onto a branch. He released the twisted skin and bones he had been picking at and it flopped off the edge of the nest and into the brush below. “As you know, I lost my father just before I fledged. I was an only chick that year. A long winter made for late, small, returns of herring and ducks had a poor time getting started too, so local prey was scarce. It was a tough spring, but ma was a tough bird and pa was a good hunter. He had to range far out to an island to hunt young seal. He was often gone overnight. About a half moon before I fledged, there was a fire. The nest tree burned and fell. It’s amazing I survived the fall.” Pepro looked out across the lake. “Pa was right there, wrapping his wings around me and covering me with moss as the fire swept up the hillside. It burned through quick and hot, and dad singed all of his flight feathers protecting me. The heat did something else to him inside too and he couldn’t breathe well. He couldn’t fly after that and he died a couple days later. There was nothing we could do but watch.” Pepro’s gaze had fallen to his feet.

Nyx moved over and put a wing around him, her eyes looking at Tristan as she pressed the side of her head to his neck. “My parents helped him out. We had a nest on a cliff across the cove. I was just a chick myself when it happened. Mother brought food to Pepro and father kept watch. Little Pepro was so vulnerable on the ground! Other birds pitched in too. His parents were well-respected, and everyone felt the loss.”

Pepro smiled and looked at Nyx. “About the time I could fly, my uncle Perro showed up and took over my care. I followed him here as soon as I was strong enough. I don’t know what happened to ma. She disappeared the night of that fire and I never saw her again.” Pepro paused and looked at the symbol etched on the tree. “So, my uncle brought me back here and taught me how to fish. The next spring, I helped him and his mate, Lily, raise a brood of three chicks! That’s exceptional for eagles since we usually only raise one or two young a year. It was great fishing practice for me and made me the good fisher that I am.” Pepro traced the lines of the emblem with a wingtip. “Maybe almost as good as my uncle.

“This carving is my uncle’s title. He was awarded that title by Volatalia Unitum’s Council for his service. He was their chief fisher for ten winters and trained many of our finest fisher eagles. He had retired a couple of years before I was hatched and was given the title and this territory. Because of that seal, nobody else can nest here.” Pepro swept his gaze around the lake before them. “Uncle Perro was probably the best fisher ever, better than any osprey even, and that’s saying a lot.”

“Indeed,” Nyx remarked. “I spent the summer here watching him teach you as I learned to hunt the alpine cliffs above. He could catch one fish and then another and carry them both back at the same time. I’ve never seen anything like it since.”

Tristan was smiling and surveying the lake and valley. “Where’s he at now?”

“The next year, he went back to Capital City with Lily and returned to the governor’s service and so I think he’s still there, but I don’t know for sure.”

A breeze lifted off the water behind them and blew towards the cliffs to the east.

Nyx’s dark eyes changed shape as the lenses flexed to focus on distant ripples of air and rising insects in the thermals forming on the slopes. “There’s some great thermals building over there.” She turned her head to Pepro. “I was thinking it might be fun to come along with you on your adventure. I’ve been to Whiterock before so I can help you find your way around.”

Pepro looked at her with a smile. “I had a feeling that you might want to come! What do you say, Tristan, can Nyx join us?”

“Certainly!” Tristan said with a smile. He picked up the leather pouch and slipped it over his neck. He had more questions on his mind, but it was time to move.

They took flight together towards the sun-splashed western slopes until they found thermals rising from the rocks. They circled upwards, Nyx and Tristan taking brief pauses to snatch insects that rose up with them. They climbed until the were higher than the snow-clad peaks and the valley was a hazy ribbon below them.

Tristan was less apprehensive about the vast skies today. He saw a blue sliver of ocean far, far out to the east and the pale blue curve of its horizon. “Peppy! I can see the ocean!”

Tristan sank abruptly as they exited the thermal and started a long glide. He giggled with the thrill of falling but also from the high of seeing the vast sea for the first time.

Tristan and Nyx followed on either side and just behind Pepro, riding his wingtip vortices. The three continued east the rest of the day, rising on one thermal after another and gliding in between.

By late afternoon Tristan could see a distant smudge of birds, ruins, and trees clinging to a promontory at the edge of the sea. Whiterock!