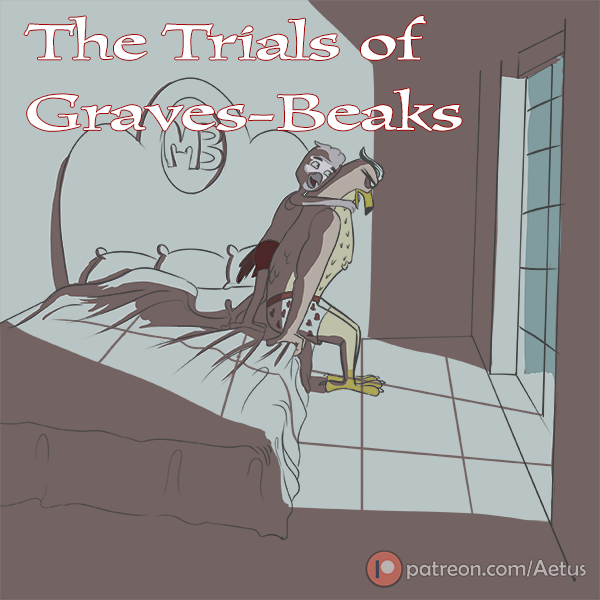 Welcome to the first part of a little story about Mark Beaks and Falcon Graves. For more background, read this intro page. This builds off of other fanfic out there that puts Falcon in the situation of being Mark’s bodyguard and boyfriend. I’m also building off of elements from season 1 and 2 of the new DuckTales reboot but don’t worry– you won’t miss much if you haven’t seen them and the spoilers should be minimal. A big thanks to Patreon supporters for encouraging and funding this story one chapter at a time.

Grey beams of moonlight slanted in through the tall windows of the huge, white bedroom and washed across two figures laying in an oversized bed. Falcon Graves was sitting up against the headboard staring down at the slender form of Mark Beaks snuggled up to his right side. It had taken a long time for him to sleep for more than an hour at a time, since shacking up with Mark a few months before. All the rooms in the house were large, empty, and stark with their shades of white and gray. It was the modern aesthetic that Mark loved but to Falcon it created a painful amount of space to keep a watchful eye upon in the protection of his boss and boyfriend. When he did finally close his eyes and slumber it only took the faintest rattle of wind against the window or a slight snore from Mark’s beak to echo about the room and startle Falcon to full alert.

Falcon looked down and studied the lines on Mark’s curved forehead. His grey feathery eyelids were closed, creased up at the corners in glowing contentment. His dark beak was smiling at the corners. Falcon stroked his head slowly, gently and smiled. He had never let himself love someone as deeply as he loved Mark. Even if he had to drink gallons of coffee to stay alert during the long, boring days at his desk in Mark’s office, it was worth it.

Suddenly Mark’s smile faded and his forehead lines sank. Falcon stopped stroking him and watched. Mark’s beak corners turned down and his mouth opened slightly. He took deep breaths and his eyes wiggled about under his eyelids. “No! Stop! Save me!” Mark’s left arm flailed and landed an uppercut under Falcon’s jaw.

Falcon winced and rolled his eyes, more from annoyance than pain, and hugged Mark tightly. “Wake up! Wake up! I’m here!”

Mark’s kicking and struggling stopped and his eyes opened. He looked up with wide eyes into Falcon’s face as beads of sweat dripped from his forehead. He heaved as though he had just been pulled from deep water. “I’m… not… gonna die?” His eyes darted around his surroundings. “I was just dreaming?”

Tears glistened in the silvery light that filled Mark’s eyes. “Oh Falcon!” He buried his beak into Falcon’s thick breast feathers and wrapped his puny arms around his broad chest.

Falcon reached up his right hand and petted Mark’s back. “There now. It’s ok. You’re ok. You know I won’t let anything happen to you.” He rocked him back and forth with both hands like a mother comforting a child. He laid a warm beak against Mark’s forehead and gave a gentle kiss. His gruff exterior melted away when he was this close to Mark, just as a hawk’s predatory visage vanishes when he tends to his own tiny chicks. “Was it a nightmare about Waddle Duck again?”

Mark tipped his head to one side and whispered back, “Yes.”

Falcon hugged him tighter, a little too tight. He closed his eyes, stung by the reality that his boyfriend was still punished for his incompetence, or at least that’s the way Falcon saw it. It all happened when Mark had hired Fenton Crackshell and, later, stolen the Gizmosuit for himself to create Waddle Duck. Mark was brilliant but also very short-sighted and he let his ambitions far exceed his grasp, yet again, until all hell broke loose. Graves had sensed the risk, the ominous danger, but it’s never easy to reign Mark in when he’s charging ahead with his plans, his ego guzzling the adulations of his social media fan base like an intoxicating beverage. Graves could crack the heads of the toughest corporate assassins but he couldn’t bear to see Mark’s big pale eyes quiver in disappointment if his dreams were crushed, even if it was for his own good. He hugged Mark tighter and his eyelids creased. He should have convinced him to stop. For his own good. He had failed him!

Falcon released his grasp and looked down with sorrowful eyes. “Sorry, boss.” He sighed and pulled back the covers, swiveled his legs to the floor and looked out the window.

Mark’s sweet smile returned to his beak and he laid a hand on Falcon’s shoulder. “Hey, Gravesie, it’s ok. You didn’t hurt me.”

Falcon sighed out as though under a load that his big shoulders were aching to lay down. “No, no… Mark. I mean… I’m sorry that I wasn’t there for you when you needed it most. I should’ve been there for you.” Falcon’s beak scrinched as he tightened his jaws and clamped his eyes shut in a raptorial grimace.

Mark stood up on the bed behind Falcon. Even with Falcon sitting Mark had to strain his skinny arms to wrap them around Falcon’s neck. He brought his smiling beak to Falcon’s nape and clung tight. “You know that wasn’t your fault, Gravesie. Look, I’m whispering this cuz, well, I’d never trust this to another living soul. But, well, the Internet rumors are true. I screwed that up.”

Falcon sighed again and rolled his eyes. He rose up abruptly and walked to the window, Mark still clutching to his neck. “Boss, I know that. But my job is to anticipate what you will do as well as what your enemies will do. I couldn’t save you…” Falcon looked over his shoulder at Mark’s gleaming face. “Not even from yourself this time. I’m afraid that our relationship is interfering with my ability to protect you. And I don’t want anything bad to happen to you. I… I can’t stand to see you hurt.” He swept a huge hand behind his shoulders and pulled Mark up by his nape to dangle in front of himself. “I will not fail you again.”

Mark held his phone up and took a picture of Falcon’s face. “Gotcha!”

“Why you!” Falcon scowled.

“Ooh! Nice one. I love the way you look late at night. Your eyes are so much darker and scary looking.”

Falcon reached for the phone to crush it but Mark clicked the send button and he knew it was futile. Instead, he dropped Mark to the floor and he landed on his tail.

Falcon raised his voice. “Are you listening to anything I’m telling you?”

Mark stood up, shook his tail, and rubbed his rump with a hand. “Yes! Yes…” Mark’s annoyed face softened. “Yes, Gravesie, I hear ya.” He stepped forward and hugged his companion’s firm washboard abs. “But you can’t expect yourself to see everything.”

Falcon hugged him closer to his front, his big feathery hands holding Mark’s head to his lower belly. “Promise me you’ll slow down next time and look before you leap. Promise me you’ll tell me what’s going on. Please promise me.”

“I will, Gravesie. I will.” Mark closed his eyes and pressed his beak into Falcon’s belly. As Graves’ hands petted his head, he let himself revisit his dream. He had had a lot of dreams of the incidents of that day, all of them fitful nightmares. This had been one of the most unsettling. He was glad that Falcon had awakened him but in the final moments there had been someone answering his cries for salvation. And it wasn’t Falcon Graves.