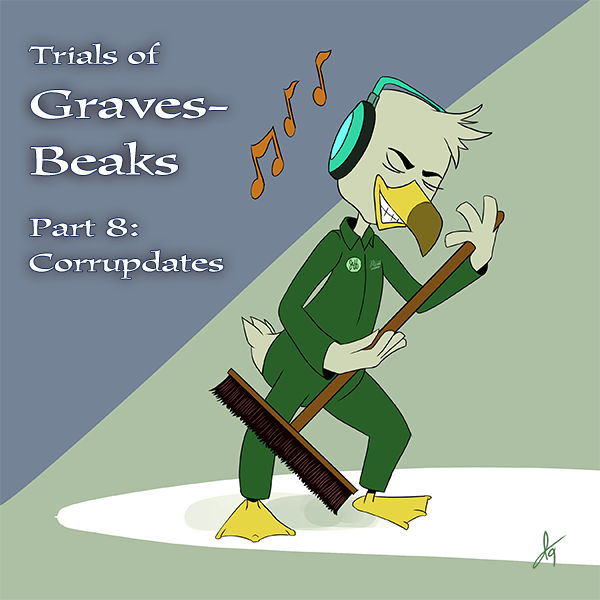 Mark’s gaze wandered around Gyro’s underwater lab. “I can’t believe you guys were able to make something as sophisticated as Waddle—err –Gizmoduck in this crappy lab.”

Gyro stopped and turned around. Mark was still gazing around and bumped into Gyro’s front. Gyro jutted his beak into Mark’s face.

“Look, jerk! You’re a guest! Don’t touch anything! Don’t. Touch. And the commentary is neither needed nor wanted. Got it?”

“GeeEEEEeeeez! Bleh! Fine! Just give me a computer and I’ll get this done myself!”

Gyro waved a hand in front of his own wrinkled nares. “Whew your breath is atrocious!” He choked out. He pulled out a small aerosol can from his pocket and spritzed the air between them. “Have you ever tried hacking Glomgold?”

Mark held a hand over his beak and exhaled then inhaled and gagged a little. “Pppffffttt… why would I? That old fart doesn’t have anything I’d ever want to appropriate.”

“Well, I have and it’s surprisingly difficult.” Gyro approached a computer station and pulled out the chair for Mark.

“Heh! Yeah for you maybe.” Mark sat in the chair and jauntily swiveled up to the keyboard. “Stand by and observe a pro at work.”

Gyro pointed at the screen. “I hate to say this, but you’re right in this case. Look familiar?”

Mark scrolled through lines of code in a flash. His eyes widened and his beak drooped. “What the hell? That… that…”

Gyro smiled slightly, “Yeah… that old fart managed to steal your own security software. Some time back we managed to hack this from a spy drone that infiltrated our facility. As you can see, it’s just a stripped down copy for mobile use but by the looks of it, it’s meant to interface with Talon Version 10, Waddle’s most secure Enterprise OS, right?”

Mark sat back and looked down at his hands folded in his lap.

“It’s worse than that. He’s stolen a copy of ‘Ultima.’” He swiveled around and stared Gizmo down. “Look. I’m not supposed to talk about this. It’s Top Secret military-grade hush-hush we’ve been working on for a few years.”

Gyro lifted his fingers to his chin. “And they trusted you?”

Mark leaned back, pointing his index fingers like two pistols. “Pew. Pew-pew. You bet your tail they did. Ya know Project Ta-Da?”

Mark blew the tip of one of his fingers like a smoking gun barrel and smiled. “That was just a cover for this. Had to hide what all the moolah was really for.” Mark’s eyes narrowed. “You cannot tell a living soul about this or we’ll both be worse than dead. You got that?”

Gyro’s skeptical frown flattened as he nodded. His usual skepticism was weakened by Mark’s intense, serious stare. Gyro was no expert in social matters but he could see no lie in Mark’s face. He leaned in closer to Mark with a foot up on a nearby chair. “OK, go on.”

“This is the next gen of security software. Unbreakable. That Glomgold somehow got it is uberbummer. He’s an idiot so someone must’ve helped him.” Mark’s thoughts raced back through his roster of trusted engineers on the project. Falcon would be able to crack the right heads and find out. Yet another reason to get him back. Mark’s bushy eyebrows lowered and his pupils focused like lasers. “I know this system very, very well and it’s going to take an army to get us in.”

Gyro’s eyes narrowed to match Mark’s and his beak corners curled in a diabolical smile. “An army, eh?”

Their quiet conversation rippled across the room, quickly drowned by the humming machines around them until only the sharpest syllables could just barely be heard above the swishes of a broom. A slender bird was pushing the broom and jaunting to energetic music that filtered through his large headphones. His yellowish beak was of medium length with a brown tip. His dirty white plumage, stubble on his chin, and his large clear eyes belied his young age. He had the look, and smell, of a college hire, working part time to make his way through school. His janitorial uniform bore the name “Jeff” in cursive script.

Jeff jaunted and jigged as he swept, sometimes spinning around his broom and striking a dance pose. His eyes were on his work, as they almost always were, oblivious to the many goings-on that didn’t concern him. He felt a buzz in his pocket and stopped for a moment to look at his smartphone. The chat app “Facebeak” opened with a picture of a similar-looking bird with a friendly, flirty smile. The bird wore a Waddle intern beanie and a t-shirt with a picture of a Sno-cone. The message read: S’up? Almost done with work?

He went to stuff the phone back in his coveralls but it slipped and bounced a few paces away. He walked over to pick it up and as he rose his eyes spotted something familiar. He caught his breath. He couldn’t believe what he saw. Mark Beaks, here in McDuck Enterprises alongside Gyro Gearloose. He rubbed his eyes, wondering if he was having a flashback from the duckweed he smoked the night before.

He knew better than to stare or look around. He was barely allowed in the lab especially during regular day hours when people were present. He turned and stared back to his broom, moving off around the corner before pulling his phone out again.

He tapped back: OMG you are not going to believe what I just saw! I’ll tell ya more later hon. <3