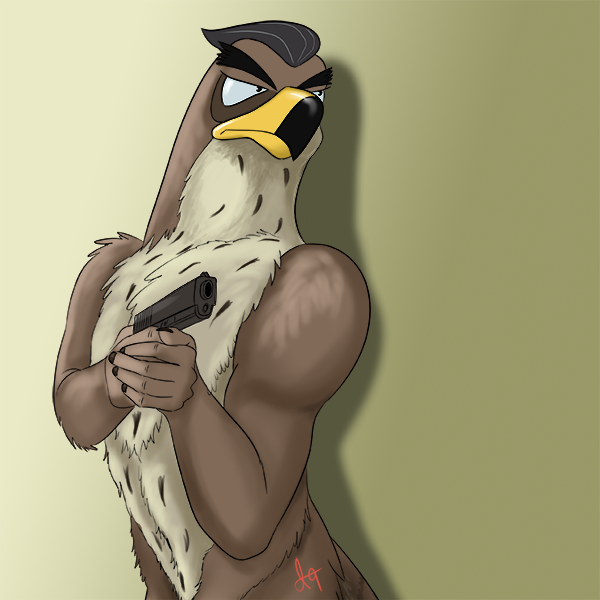 A DuckTales 2017 Fan-Fic By Hal Aetus

I discovered Disney’s DuckTales 2017 (the official name of the rebooted show) in 2018 thanks to some fellow bird creatives. I really enjoyed watching most of it. Yeah, I know, it’s supposed to be a kids show. But I’m never going to have kids and I love bird things! The new show, like the old, is chuck-full of interesting bird characters of various species that are fun to draw and fun to day-dream about in new situations and stories. After all, what bird-nut wouldn’t like to sit back and dream of a world where bird-people existed?

Why did I write this fan fiction?

Since it is a kids’ show, the plots are shallow and the characters, while way better than the 80s version, are still pretty shallow too. Hence why some creatives like to write or draw fan-fiction (or “fanfics”) of the characters loosely based upon elements of the show. In my case, a good friend (WorldsBestEagle as she’s known on my Patreon) inspired me to write an ongoing fanfic involving her two favorite characters, Falcon Graves and Mark Beaks and she even put up a monthly pledge to inspire me. While the generous pledging does keep me on track it seems hardly needed as I’ve really enjoyed creating elements of the world and characters that were lacking to me in the show.

If you’re not familiar with DuckTales then there may be some mild spoilers here but most of this story is completely non-canonical so nothing that should ruin your enjoyment of the show. In the show, Falcon shows up only once, way back in the first season, as a “corporate saboteur” to steal intellectual property from Mark’s tech company “Waddle.” (It’s rumored that Mark Beaks is actually an amalgam of tech legends Mark Zuckerberg and Steve Jobs, but you watch and see if you think so).

In other fanfic that I researched I came across a popular non-canon backstory where, after the fateful episode above, Falcon sticks around as Mark’s bodyguard. After a while, they become close and end up coming out gay to each other. Pretty soon things heat up and the two are in love. I have to say that reading the fanfic about this struck a cord with me and the early days of my coming out of the closet and finding my first boyfriend (now my husband!).

In my fanfic, I’ve built upon that background with a plot that tests their relationship, Mark’s credibility, and ultimately threatens their entire world. While it has mature themes at times and some swear words, there’s no sex and no extreme violence. It’s still the zany DuckTales universe at heart or at least I’ve tried to keep it that way. If you’re familiar with the show you should recognize some tropes from the show that I’ve included to help make it “fit” and for comedic relief.

Without further ado, read away! Each chapter, released on a monthly basis, is approximately 1000 words, so they’re quick reads. As of this time (October 5, 2019), there are 9 chapters released so I’ll release a few of them here now and then one chapter per week, until we catch up with the current flow of one per month. If you want to see all of them right away, please subscribe to my Patreon. It only takes a buck a month to help fund my work and see the stuff early!

Mark Beaks is having nightmares but he has reasons for not telling Falcon all the details. This is a Disney DuckTales-inspired fanfic.

Mark Beaks is obsessed with GizmoDuck to the point of nightmares that keep him and Falcon awake. Time for a professional opinion.

Dr. Sid Fisher does his best to help Mark reveal and confront the secrets that are driving him mad.

Mark secretly meets with Gizmoduck but his desire to wear the suit again makes the meeting very awkward.

Mark’s problems are exposed on the media and it strains his relationship with Falcon.

Mark hits bottom and faces the decision to swallow his pride and receive help from one of his enemies.

Mark & Gyro become unlikely colleagues in a plot to clear their reputations.

An ongoing DuckTales 2017 Fanfic. In the thick of getting the data needed to clear his name, Mark Beaks makes a startling, and sickening, discovery.

An ongoing DuckTales 2017 Fanfic. In this chapter, Mark finds himself and Flintheart in the same predicament.

An ongoing DuckTales 2017 Fanfic. In this chapter, an unexpected hero arrives but it takes teamwork to prevail.

An ongoing DuckTales 2017 Fanfic. In this chapter, a new infantry arrives to help Mark and Falcon out of their scrape.

In this chapter, Mark and Graves must face Ultima’s formidable defenses. Fortunately they have help.

An ongoing DuckTales 2017 Fanfic. In this chapter, Mark confronts his maniacal digital self in a desparate effort to save the world.