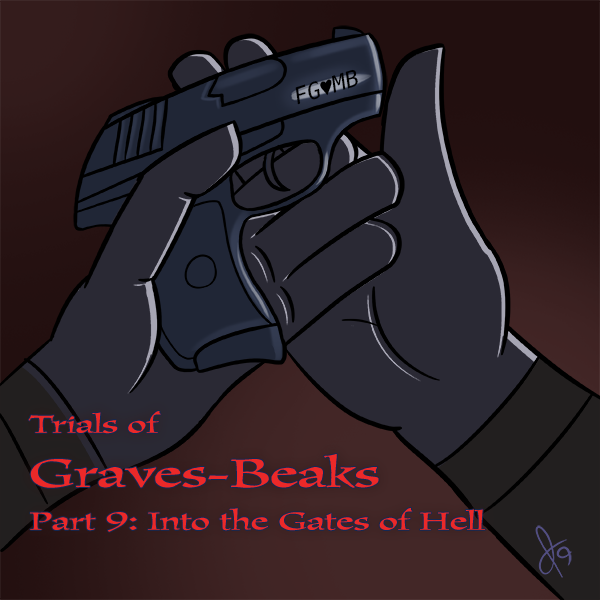 A dark and misty night lay heavy on Duckburg. Thick fog rolled through the skyscrapers, propelled by a cool breath of wind. In the wee hours of a Monday morning, nobody was on the streets. All the lights in all the business buildings were out. Even Glomgold Industries’ headquarters was dark except for the bright spotlights on the roof that illuminated a billboard bearing Glomgold’s face. Most people shut their curtains against this obnoxious visual assault but tonight that didn’t matter since thick, low clouds shrouded all of the buildings.

A flock of city pigeons used the giant billboard as a roost and nesting site, sprinkling Glomgold’s face with flecks of dung. Their eyes opened briefly as the twin engines of a large cargo plane droned by low overhead, hidden in the clouds. It wasn’t uncommon to hear McDuck’s amphibious plane coming or going at any hours of the day or night so after a brief look around, they crapped on Glomgold’s image again and cuddled back together, basking in the warm glow of the spotlights.

But suddenly a slender figure, dressed in black, swung down out of the dark mists. The pigeons scattered in panic as he touched down on the roof and his ballooning black parachute deflated and dropped. In a flash the stealthy intruder stowed his parachute and slipped into the shadows. Two big yellow eyes darted back and forth in the eyeholes of the man’s black mask—the eyes of Mark Beaks. A smile creased the corners of the grey beak that protruded through the mask as he pulled out a smartphone and started tapping. “Showtime!”

Under the mask two earbuds pumped out house music as Mark’s fingers swept across his phone’s screen. He pointed to a security camera and then to the lights. They all blinked out and the rooftop went dark. He spun and let out a quiet “Oooh yeah” as he danced over to a heavy door. He spun again and made a feigned high kick at the door as he tapped a button on his phone. The electronic lock clicked and the door popped open. As if dancing to a saucy tune, Mark z-snapped his fingers and the lights and security cameras inside the stairwell went dark. As the door shut behind him he stopped the music and pulled night vision goggles over his eyes. “I’m in!”

Mark slapped his phone into a holster on his side and made his way down the stairs. In his earbuds, the voice of Gyro crackled in, “You should only have to go down 2 floors. Then the fun really begins.”

Beaks skipped his way lightly down the stairs, barely making a sound. He stopped at a door that read “Floor 53” and pulled out his phone again. He whispered quietly to himself as he tapped out on the screen, “A little of this… aaand a bit of that… aaand voila!” The door clicked and he pulled it open just a crack. He poked a slender rod out through the seam in the door and a tiny scanner read the room. Mark studied images on his phone—a 360° photo and a wire-frame tactical display of all the electronic surveillance features.

The hallway beyond was brightly lit. There were elevators and an unmanned security desk. And there were several security cameras, motion sensors, and laser scanners. Behind the security desk was an impressive vault-style door with biometric scanners flanked by two machine gun pods aimed right where a person would have to stand to use the interface. Inscribed in a thin, modern font across the front of the brushed stainless steel were the words “Glomsoft Security.”

Mark scrunched his face like he’d just smelled dog poop. “Why that bloated goat-blower! He renamed it! He stole MY software!” Mark rolled his eyes and went on swiping and tapping about on his phone screen. “I’m moving to phase 2. I’m going to shut down the power to the hallway. It’ll take out lights and laser scanners for 8 seconds so the guns can’t take me out right away. I’ll have to deal with the cameras the old fashioned way though. This will be tricky so don’t distract me.”

Mark pulled a pistol out of a holster and let out a long sigh. It was a compact 9 mm in tactical matte black. Falcon had given it to him for their one-month anniversary. He had also taught Mark how to fire it with deadly accuracy, though so far he had never murdered anything more than targets. He paused a moment as he emptied his mind. He felt a little warmer and safer, not from the mere presence of the tiny gun, but because of what it represented. Falcon loved Mark in his own, protective way and right now Mark really needed to feel that. Mark gave the little gun a light kiss. “For good luck.”

Mark tapped a final button on his phone and Clack!, the hallway went dark except for the emergency exit lights. He shoved the door open and took aim at the first camera. Pow! Then the second camera at the opposite end of the hallway. Pow! Both fell in showers of plastic bits. Mark skipped up the hallway and leaped onto the security desk. He slid across its smooth surface and landed on a rolling office chair. His momentum rolled him right up to the vault door interface. He quickly punched in a long code and just as he hit the Enter key, the lights clicked back on and the two gun pods on either side of the door awoke.

Laser beams scanned out from the gun pods and they swung around, pointing directly at Mark’s face. They made a cocking sound and then went silent, stretching milliseconds into what seemed like minutes. Mark’s heart was thumping so loud that it could have been heard across the room. Beads of sweat dripped down his beak and he winced, expecting to be blasted to a million pieces.