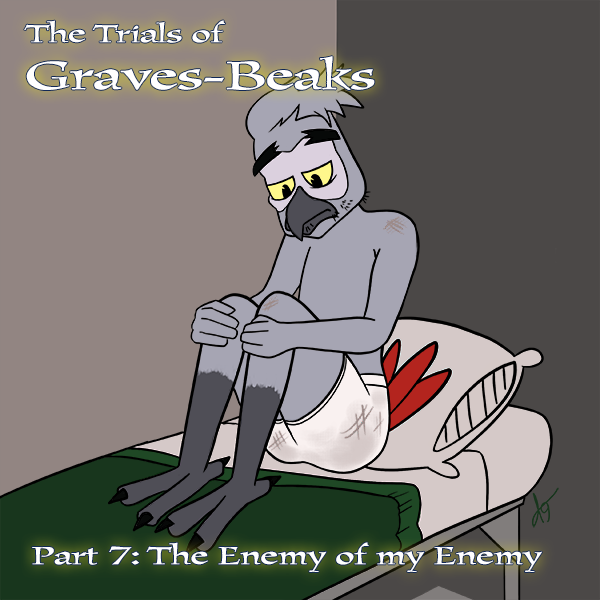 Mark woke with a slobbery snort and convulsed in a fit of wet coughs. He squinted his bloodshot eyes against the cold light that slapped his pale face. Keeping his eyes closed, he fumbled around with shaky hands to explore his environment. He was no longer bound and he was lying on a small bed. He scooted close to the wall and pressed his hot cheek to the cool concrete. The room smelled musty—not like a hospital. He wondered if he was in jail. Or worse. He gradually cracked one eye and surveyed the room. There wasn’t much else to see. Beside the bed there was a simple chair, a bucket, a bottle of water, and a gray metal door with no window. It looked like a storage room turned into a cell.

Mark massaged his pulsing temples with one hand and tried to estimate how much time had elapsed. He really had no idea. His phone was gone. His Waddle watch too. All he had was his pink heart-studded underwear. His throat felt like he had swallowed a handful of gravel. He tried to rise but fell back down on the bed, his arm fishing around for the water bottle nearby. When he picked it up something dragged and he realized there was a strand of thread tied to it. He jerked on the string and a bell rang outside the door. Oops, He thought to himself.

A moment later and there was a clattering jingle of keys on the other side of the door and it cracked open. Mark scuffled to the foot of his bed, back tight in the corner of the room, clutching the bottle of water as though to use it as a club.

“He’s awake, boss,” came a gruff voice from behind the door.

“Step aside then!” Mark had heard that voice before. But where?

Gyro Gearloose pushed the door open and it banged against the wall.

Mark winced and covered his ears in pain. He spat out with clenched beak. “Easy, easy, jerk! Is that any way to treat someone with a colossal hangover?” He painfully opened his eyes and saw Gyro. “You! What the…? You?”

“Mr. Beaks, take this. It’ll end your hangover and we can get down to business!”

“Trust me, Mr. Beaks, we’re your best friends right now. You know, the enemy of my enemy is my friend?”

“Oh bleh. Trust you? Pffftt… You kidnapped me!” Mark’s beak frowned and he stood up abruptly. “Let me go!” Mark’s eyes rolled up to his forehead and fluttered as he toppled back onto the bed and hit his head on the wall. He gripped the pulsing knot on the back of his head and stifled a cry of pain.

Gyro rolled his eyes and sighed. “I thought you were supposed to be a genius… Well, genius, shut up and listen for a few minutes. We saved you, quietly, discretely, from being captured by the real thugs.”

Mark squinted and looked past Gyro. In the hallway stood the silhouette of a tall, broad-shouldered bird. Could it be Falcon? He blinked and the illusion vanished. It was one of the well-dressed pelicans that had pulled him from his backyard.

Gyro continued, “The world thinks that you’ve taken a leave of absence, so no one is looking for you except for the criminals that have framed you.”

Mark held out his hand, palm up. Gyro dropped two red pills into it. Mark slapped the pills in his beak and drank a slug of water, then sat rubbing the bridge of his nares. “Go on, tell me more…”

“Two nights ago?” The ringing stopped in Mark’s ears and his vision sharpened. The headache slid from his forehead, down the back of his neck, and away into oblivion leaving him wide-eyed and clear-headed. “Wow, that stuff works fast! What was that?”

Gyro smirked. “Just a little something I made up after a really long night of…” He cleared his throat. “Uh, never mind that now. The thing is, we know it was a frame-up and we think Glomgold is involved. We think he intercepted our security camera feeds and edited them. But we don’t have the proof we need yet.” Gyro slumped and leaned against the wall.

Mark’s beak corners twisted upwards in a diabolical grin. “You need my help, don’t you?”

“Pfft. ‘Need’ is too strong a word. But your help would speed things up.”

“Give me the plans for Gizmoduck and I’ll help you out.”

Gyro giggled then stopped abruptly with a flat expression. “No.”

“Look, Beaks, it’s your feathered ass is really the one on the line here. Your reputation is more damaged than ours. How are you going to show your face at work if everyone thinks you made love to a robot suit?”

Mark’s beak blushed and he looked down at the floor for a moment as he remembered what Falcon had said just before leaving Mark: Gizmoduck can have you. Falcon was royally pissed off at the time but Mark remembered the look in his eyes. Usually they stabbed you like two daggers but at that moment, when they should have been sharpest, there was a trembling in his pupils and unsteadiness to his thick brows. Falcon was in pain at that moment. He was wounded deep.

Mark’s eyes drifted to Gyro’s feet as he grappled with the possibility of accepting help. He clenched his fists as he thought of fighting Glomgold on his own. I can do this! But then he remebered Falcon walking away. His vision blurred and his fists went weak. I can’t lose Gravesie. He’ll be gone for good if I screw this up. I do need their help…

Gyro continued: “Consider yourself lucky that it serves both our purposes to work together. But if that’s not enough… Anything you find once we infiltrate Glomgold’s computer network, you can do with as you please.”

Mark’s face lifted to meet Gyro’s. The spoiled brat expression was gone, replaced instead by a steady beak of determination. There were tiny glistening tears in the corners of his reddened eyes. He held out a hand in an offer of a handshake. “Let’s do this.”

As the two walked out of the room and down the hall to the lab, Mark’s thoughts drifted far away. They soared out towards a falcon that had made him feel safe and complete. He didn’t need to pretend when he was with Falcon. He could be his weird self. He could even have faults and be vulnerable. He never felt more at ease than in the arms of that big, strong bird. Despite his outward smugness, until he knew Graves, Mark had never known a feeling of complete security. Once upon a time he would have scoffed at people that thought that emotional safety was a worthwhile thing. But now that he had experienced it, and lost it, he knew he would do anything to get it back. The thought of wounding the strongest bird he had ever known made him want to curl up and draw into himself—implode until he was the heartless, selfish bird he had been before he met Falcon. But hope buoyed him up. The hope that he could make things right.