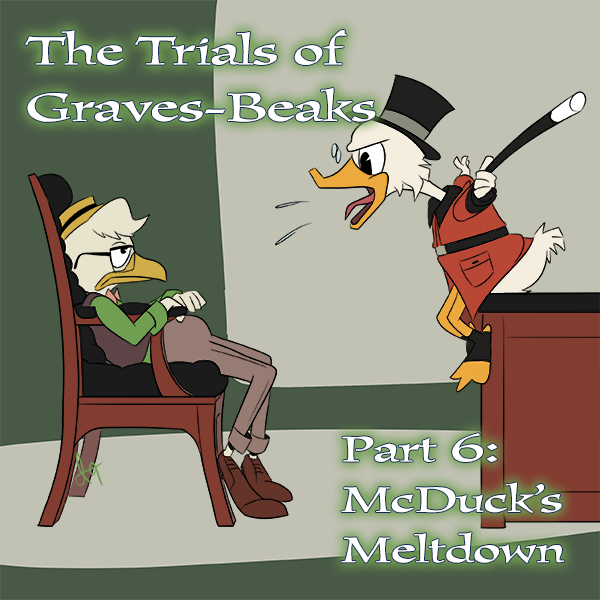 Scrooge McDuck stared across the polished wood conference table at the three Buzzard Brothers, moving his gaze to each pair of beady yellow eyes. His beak corners were flush and his bushy eyebrows rustled. “So you’re saying that Gizmoduck’s alleged impropriety is allegedly tanking our stock and you want to bury the project and the allegations?”

Bradford Buzzard moved his spectacles farther up his beak and held up a colorful line graph with a sweeping, diving line on it. “There’s nothing alleged about this, Mr. McDuck. We advised against a superhero in the first place. Our research has shown them to be, how shall I put it?” He smiled smugly and continued with a condescending tone, “…abysmal investments. But you stuck with it anyway and, well, I don’t mind telling you ‘I told you so.’”

Bentley smiled and leaned in. “Besides, Mr. McDuck, there’s far more profit in selling off the patents for all of Gizmoduck’s individual components. Or manufacture and sell the technology ourselves. Everyone from auto manufacturers to the military would pay a fortune and we could rebound out of this slump way farther ahead—“

Scrooge pounded his fist on the table and leaned forward in his chair. “We are not going to throw Gizmoduck under the bus and that’s final! Yes, yes, yes, he’s not a profit-maker but he’s not supposed to be! He’s my contribution to the well-being of Duckburg but that’s something you vultures have never understood.” Scrooge hopped down off his chair and paced while the vultures slumped back in their chairs with a collective squeak.

Scrooge stopped at the coatrack and smiled as he perched his top hat on his head and picked up his cane. “Gentlemen, I’ve had my reputation dragged through the mud before and I’ve never backed down from a fight. This stinks of a conspiracy and I’m going to get to the bottom of it. Meanwhile, you just control the damage. Good day!”

As Scrooge closed the door and marched back toward his office, he grumped under his breath, “Dour old bald-headed ninnies. What do they know about reputation? They have none! Ugh!” He was so preoccupied with his fuming that he stalked right past Gyro Gearloose waiting in a seat outside his office.

Scrooge squeaked to a stop on the tile floor. “Oh, Gyro! Yes, get your tailfeathers in here right now!”

Gyro rolled his eyes and followed with slumped shoulders. He took his familiar seat in front of Scrooge’s desk while the door slammed behind them. Scrooge walked over and positioned himself between Gyro and his own desk, brow furrowed and quivering while his red-hued beak frowned.

“What the blazes did you and Fenton hatch up this time?!”

“Ugh! If I had a dime for every time you’ve said that I’d be twice as rich as I am now! Gizmoduck has been nothing but trouble. How did I let you talk me into keeping him around anyway? And putting a child in the driver’s seat? I must have been off my rocker to go along with all of this!…”

As Scrooge ranted and rambled on, Gyro slumped in his chair, letting the words and the faint spatter of duck spittle roll of his feathers like rain. He was well-trained from years of experience as McDuck Enterprise’s lead scientist. The price of so much intellectual freedom was being roasted by the boss periodically. He just had to wait until Scrooge tired himself out.

Finally Scrooge’s words slowed down and he leaned his butt back against his desk, breathing heavily. He wasn’t out of shape, just out of his mind with anger and, now, out of words.

Gyro cleared his throat. “Sir, may I speak?”

“I’ve interviewed Fenton, I’ve reviewed our security recordings, and I’ve inspected Gizmoduck from bill to tailwheel and I can’t substantiate any of the garbage we’re seeing on the news. Furthermore, someone tampered with our security recordings to steal footage and corrupt our originals. It’s a very cleaver set-up, one that will be impossible for us to prove without more evidence. Someone wants to smear Gizmoduck and, ultimately, McDuck Enterprises.”

Scrooge clenched his beak and quivered. Gyro mused for a moment about the probability that Donald and Scrooge shared the same explosive anger gene. But then he refocused. He waited 10 seconds and started speaking again.

“By the way sir, if you’ll recall, I was already in the process of scrapping Gizmoduck when Fenton stole the suit and Waddle corrupted it. As much as I hate to admit it, it was Fenton’s quick thinking that saved the town. And it was his spirit of self-sacrifice that inspired us both to give him a second chance. You told me to remind you of this, should you ever regret continuing this unprofitable, but, uh, amazingly generous and selfless contribution to the community…” Gyro forced a nervous smile.

Scrooge removed his glasses and slapped a hand to his forehead knocking his hat down his back and onto the desk. He gripped his face, wiped his fingers down over his bill, and deflated with a long sigh, sagging his butt all the way onto his desk blotter. A snicker bubbled up from his chest and his closed eyelids bent into bows as he giggled. His tail perked up and his shoulders lifted as he smiled.

Gyro relaxed and let his smile become genuine. “It’s ok sir. I’m used to it. But, Sir, I have an idea of who did this and how we can get the evidence we need to nail the ones responsible.”

Scrooge swung his dangling feet forward and back like a giddy school kid. “I knew you would! I can always count on ye. So tell me the plan!”

Gyro’s smile faded slightly. “Glad to hear that, sir. After all, our quarterly research budget review is coming up soon.”

Scrooge’s expression flattened. “Just tell me the plan” he grated.

Meanwhile, across town, Mark lay snoring under a bush in his back yard. Two vultures circled over his yard, while a third was pecking at his naked leg. But suddenly the vulture croaked out and took into panicked flight as a tall shadow approached. Two broad-shouldered birds with thick necks and fat pelican bills walked up to Mark. They wore jet black business suits and sunglasses. One of them pulled out a roll of duct tape from a pocket while the other moved in closer and yanked Mark out of the bushes by his ankles. Mark lifted his face, still peppered with clinging beauty bark, and looked up. His bloodshot eyes widened and he opened his beak to scream but it was instantly muffled. One of the birds jabbed Mark with an injection while the other zip-tied his arms and legs. As soon as Mark sagged and went silent, they swept the beauty bark back into place and quietly carried him off into the forest.