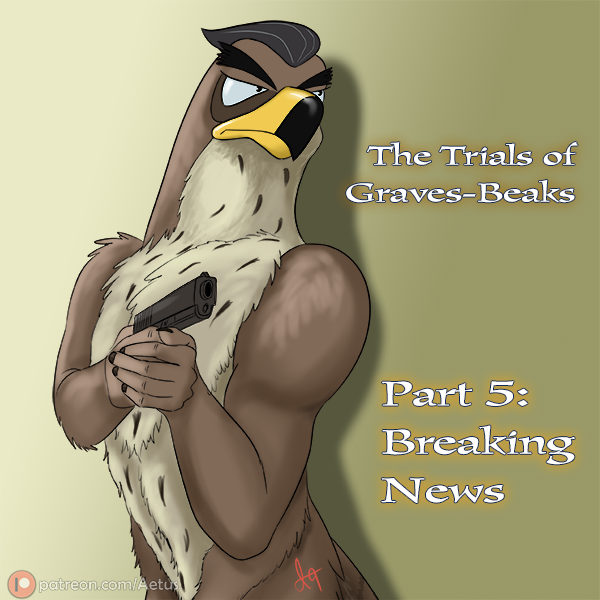 Falcon yawned, stretched his thick arms, and rubbed his sleepy eyes. His arms came down straight out to his sides but he felt nothing but pillows. He sat up in bed. Where’s Mark? He squinted at the clock through the sunbeams streaming in through the window. Crap! It’s 8:30! I’m late! But where the hell is Mark?

Falcon yanked back the sheets and swiveled his talons to the floor. “Hnnnngggg… wow, I haven’t slept this well in months! Mark! Mark! Where are you?” He rubbed his feathered head.

When no reply echoed back Falcon jerked his head around nervously. His hand reached over to the bedside table and pulled the drawer open slowly as he continued to study his surroundings. “Maaaark?” he called louder. He pulled out his pistol, stood up, and slid into the shadow of the wall by the window. Then it dawned on him. I slept so well because Mark wasn’t in bed all night!

Falcon’s jaws tensed and his beak crinched. He was angry with himself for letting his guard down. He quietly padded across the room, weapon at the ready as his head spun each direction looking for signs of an intruder. The bathroom was dark. Mark wasn’t in his home office. The hallway, theater room, the living room, kitchen… all were empty. Everything was in place too and Mark’s keys were on the kitchen counter right where he always drops them. Wait! The bottles in the kitchen liquor cabinet were out of order. A bottle of cognac was missing too. Falcon’s muscles relaxed as he began to assimilate what this meant.

Mark had been very quiet on their ride home from last night’s meeting. And whenever Falcon touched him he tensed and closed up. His eyes were red and his beak blushed. It was clear that he was in distress but Graves couldn’t get him to open up about it. He really knew something was wrong when he didn’t touch his phone for the whole ride home. Falcon had begged Mark to let him massage his tense muscles, hoping that his boyfriend would open up about what happened. But Mark declined and just rolled over on his side in bed and seemed to pass out. Falcon didn’t press any further, figuring that Mark needed sleep and would tell him when he was ready.

Falcon knew exactly where Mark would be. He walked through the utility room and grabbed a robe from the dirty laundry. He slipped it on as he walked to the back door & peered out the window. Yep, there he is. Falcon sighed, clicked his gun on safety, and dropped it in his robe pocket. He quietly opened the door and walked out.

Mark was curled up in a feathery ball in a patio chair, the sunshine just beginning to bathe him as the sun climbed higher around the corner of the house. There was an empty bottle of cognac laying on its side on the ground by his chair. His phone and tablet were on the table.

Falcon rested a warm hand on Mark’s head and petted affectionately. Mark squirmed and smiled, sighing out a cloud of alcohol vapor.

Falcon whispered, not wanting to resurrect his boss into the world of pain quite yet. He would call Waddle and tell them to clear out Mark’s schedule for the day. He deserved a day off for a change. Falcon gently dropped the chair into a flatter position, peeled off his robe, and tucked it around Mark. He went back inside to make the call, coffee, and a hangover breakfast for his mate.

Pretty soon Falcon had the blender whirring for his morning pre-workout smoothie and the scent of hot coffee was filling the kitchen. A TV morning/news show was babbling in the corner, largely ignored. Falcon was “old school” and still received his news primarily from broadcasts or print, when he had time to spare at least. His job was to take care of himself and Mark so what was happening in the rest of the world was less relevant. But he jerked to attention when he heard the announcer say “Mark Beaks.”

He shut off the blender and grabbed the remote to turn up the sound. The announcer was a feminine crow with a plastic smile and twinkling eyes. “…That’s right, turn up your sound, you heard it here. Just in, Mark Beaks, Duckberg’s third eccentric billionaire, has a secret lover! An anonymous source claims that Waddle’s CEO has been obsessing about Gizmoduck ever since the controversial unveiling a few months ago when he allegedly appropriated the superhero technology from McDuck Enterprises.” Falcon’s eyes were wide and his beak hung open. Scenes of that fateful day played as the announcer recounted the disaster.

“…His obsession took a dark turn when he began stalking Gizmoduck. Last night our source captured this exclusive video of the two in a secret meeting…” Video snapshots from the secret lab flipped by on the screen. They showed Mark hugging and kissing Gizmoduck. Then an image spun onto the screen of Mark being held by Gizmoduck’s extend-o-arms down below his knees with the portion between Mark’s beak and Gizmoduck’s crotch digitally blurred. Falcon’s hand trembled as it gripped the blender pitcher. *BAM!* it shattered sending shards of glass and pink smoothie across the kitchen.

One of the other morning hosts declared, “Woah! How does that even work?” The shot widened to show a bluejay, the host crow, and a flamboyantly gesturing male kestrel, all consumed with tittering laughter.

The kestrel giggled back with a lilt, “I don’t know! I suppose Gizmo’s got the attachments for any occasion!”

Clapping and a loud “Whoooooo!” of filthy approval came from the audience as they broke for commercials.

Falcon just stood there for a full minute staring like a mad bull, drenched in pink slime, heaving, hand bleeding. He growled mindlessly through his clenched beak and thudded his feet as he marched out the back door to Mark. He gripped the patio chair and flipped it on its side dumping Mark onto the ground.

“Ughh! Heeeeyyy wutts the big ideeaaaa?” Mark’s thin arms flailed as though looking for a clump of ground to hold on to lest the earth spin him off into space. “OOooooOOOoohhh… My head hurrrrrts. My stomach… gulp!”

“What’s the big idea?” Falcon’s eyes bulged and a vein pulsed on his forehead. He roared, “What’s the big idea!?” Falcon yanked the robe off of Mark and pulled his gun out of the pocket. He dropped the magazine and cleared the chamber. As mad as he was he didn’t want any accidents. “What did you do last night with Gizmoduck? It’s all over the news that you two are having an affair!”

Mark crawled over to a bush and puked.

It all made sense now to Falcon. He was normally a guy that faced facts straight down the barrel but when it came to love he found himself making compromises on the truth. He hadn’t wanted to face the fact that Mark’s obsession with Gizmoduck was more than just interest in the technology. Even for a big, iron-clad hunk like Falcon, his heart was not invulnerable.

“I dunno wutt you’re – bluurrggg!” Mark wretched again in the beauty bark and wiped his beak with his arm.

“Sure! Sure! You had me drive you to a quote-unquote ‘meeting’ with Gizmoduck and make me leave while you licked his light pole! What an idiot I’ve been!” Falcon wadded up the robe and hucked it at Mark. “You moron! You can clean up this mess yourself! We’re through!”

Falcon turned and walked towards the back door.

“Wait! Wait! I wanted to tell you…” Falcon stopped in his tracks, still facing the door, eyes closed against the pain. “I… I… felt so embarrassed. But… but… last night was…”

Falcon began walking again. “I don’t want to hear it, Mark. Gizmoduck can have you!”