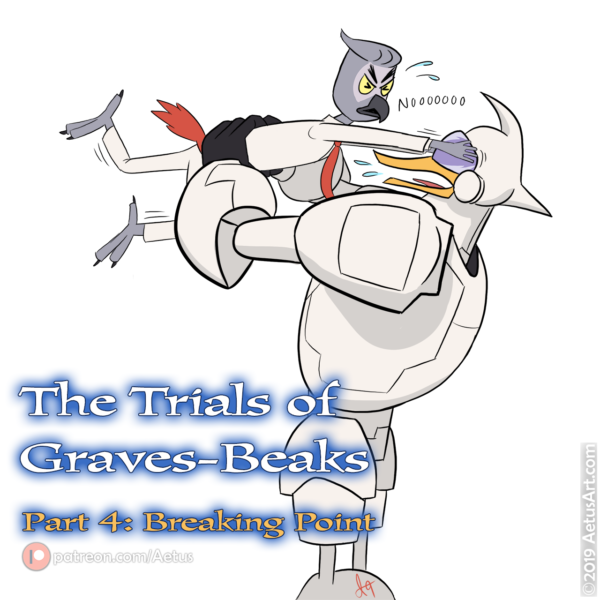 A single street light flickered over the rusty back gate of a dingy old warehouse. A tiny electric car whirred into the circle of light, its tires crunching on the gritty, cracked pavement. The driver’s window slid down and Falcon glared out into the misty grime. He hated electric cars. He preferred inches of steel to protect from bullets and the reassurance of a V8 and smoking tires to get his clients out of trouble quickly.

Falcon mumbled. “I checked this place out today and I don’t like it.”

Mark’s face reflected the soft blue glow of his phone as he pattered away on a social media app. “It’ll be ok. Gizmo—“ Mark stopped. He had almost ruined the secret. It had been hard but for the past few days he had managed to keep from revealing the secret identity of who he was meeting, even to Falcon. As far as Falcon knew, Mark was meeting with Fenton Crackshell to buy some of Gyro Gearloose’s secrets. “—Er, I mean, Gizmoduck might back you up if there’s trouble. Look! I’ve got that panic button app on my phone!” Mark held up his phone with a big red button on the screen. “One tap and you’ll get a text with my location.”

Graves pulled his beak back in the car with a sigh. He leaned over and wrapped his big hands around Mark’s face and tapped his beak to Mark’s. “You keep that hot and ready, hon. I’m not worried about Fenton but there’s all sorts of riffraff in this part of town including those idiot Beagle Boys.” He kissed Mark slowly and hugged him closer. “Now let’s go have a look.”

With a quiet click they both exited the car and walked up to a rusted door on the loading dock. Falcon stepped in front of Mark and tried the knob. It was locked so he knocked. A moment later there was a click as the door opened. The short figure opening the door was backlit by bright lighting. Behind him was a clean, tiled floor and the soft whir and bleeping of technology.

As their eyes adjusted to the brightness they saw it was Fenton. He smiled and held out his hand to the towering Falcon Graves. “Hello sir! I’m Fenton. Come in, come in!”

The room they entered was nothing like they expected. There were well-organized workbenches and racks of computer equipment, robots methodically polishing the floor, and security cameras at every corner. In the center a large duffle bag rested on a workbench. Falcon’s eyes were wide and darting around, assessing the security situation. There were only two doors to the room: The one they entered by and one marked “Restroom.” It looked safe. Mark squeezed his hand and Falcon sighed and his shoulders relaxed.

Graves whispered to Mark, “Boss, those cameras could be recording you.”

“That’s right, Mr. Beaks. Don’t worry about those cameras. Nothing but business. But, still, Mr. Graves, we need our privacy. You know, geeks doing geek stuff.” Fenton’s eyes locked on Mark’s for a moment and Graves noticed. Then he darted away and picked up a gizmo from a workbench. “This is what I wanted to show you Mr. Beaks! It’s a digitizer that can capture pictures from your mind! It’s adapted from a refrigerator-microwave we were developing that used electromagnetic wave guides to intercabulate psi particles blah blah blah…”

To Falcon, Fenton’s voice blurred into technobabble nonsense that made him sleepy. He shook his head to clear it and bent down to Mark, who was already marching like a zombie towards the alluring device in Fenton’s hands. “Boss! Don’t let him take pictures of your mind!”

Mark mumbled back, “Mhmm…” as he reached for the shiny thing.

“I’ll be right outside.” Graves turned and exited quietly, the door lock clicking behind him.

As soon as Falcon was gone, Mark dropped the delicate device with a clatter to the floor. “Good. I thought he’d never leave. You turned off the cameras?”

A bot came over and swept up the broken bits at their feet while Fenton stared in disbelief.

Fenton nodded. “Uh, Yep. I don’t want Mr. McDuck to know about this anymore than you do.”

“So where’s my pal Gizmoduck?” Mark’s eyes were impatiently twitching. “Yoooo! Gizmoduck? I don’t have all night!”

Fenton wondered, for a moment, whether Mark was accidentally a jerk or if it was part of a practiced image. In either case, it was annoying. He just wanted to get this over with. “Blathering blatherskite!”

In an explosive instant of whirling gadgetry, Fenton was lifted and encapsulated in the white robotic suit. As he settled on to his wheel and the electric glow faded, Mark’s eyes were bright and wide.

“There… you… are…” Mark smiled and giggle, his eyes glistening with happy tears. He bounced into the air and Gizmoduck caught him.

Gizmo moved his hands up, carefully cupped Mark’s thin body, and patted his back. “There, there, Gizmoduck’s here!”

Mark made a fist and rapped on Gizmo’s helmet. “No, no, no… you’re Waddle Duck, remember? You’re my Waddle Duck. Now hold me like you remember!” Mark’s usual smile had twisted into a deep frown and furled eyebrows of disappointment. “Hold me!”

Gizmo knew that this was part of some kind of therapy for Mark. He didn’t know the details but he had been instructed to do anything necessary to help Mark live out his fantasy. Anything. And he liked helping people. So he ignored what Mark had done to him in the past, he swallowed hard to keep down his lunch, and he wrapped his mechanical hands around Mark and hugged him tight to his breast.

Mark giggled and squirmed in his hands, rubbing a polished pectoral plate with his hand. “Please, call me Beaksie.”

Gizmo coughed dryly to disguise a desire to retch. “My… Beaksie… It’s all… ok, Beaksie.” He intoned the words mechanically but Mark tittered with joy.

“I’ve missed you Waddle.” Mark’s voice cracked. “Even though I almost blew us both up.” He broke into tears and threw his arms around Gizmo’s neck again. “Can you forgive me? I didn’t mean to do it!”

“Uh. Oh.” Gizmo stroked Mark’s back and shoulders. “Of course I forgive you! My system had bugs. It wasn’t your fault!”

Mark hugged harder and Gizmo squirmed and backed against a control console, catching himself with one arm while still holding Mark.

Gizmo felt Mark’s warm beak touch his bill and lay a passionate kiss upon it. Inside his helmet a flashing icon bleeped out a warning. “Warning! Inappropriate contact!”

“Whoa! Stop! Mr. Beaks! You can’t!” Gizmo began to pull Mark off of him but Mark clung tight to his faceplate.

“No, Waddle! Tell me that you’ll be mine again. Let me try you on again!”

“No, Mr. Beaks, it won’t work! Gizmoduck uses my brain now for his core processor. He won’t work with you anymore.” He tugged harder on Mark, trying to rip him off gently. Mark’s nails scraped and screeched along the metal surface as he began to lose his grip. “Mr. Beaks! Let… go!”

Mark’s world stood still for a moment as the faceplate gave way. There was a loud pop as screws snapped and zinged away. The faceplate came loose in Mark’s hands and he lost his balance falling back slowly as the visor swung up. There before him was the reality he tried hard to bury. Fenton’s plain duck face, outlined by Gizmo’s shiny helmet. Two arms extended and broke his fall then set him gently on his feet.

Mark stood with beak open for a moment processing what had just taken place. He felt ashamed and humiliated. His beak frowned and a tear fell from his reddened eyes.

Mark sniffled, his lower beak quivering and one eye twitching.

“I wear Gizmoduck so I can help people. It’s not about popularity or profit. It’s about helping people…”

Mark interrupted the end of the sentence with a very loud, wide-beaked yawn. “Booooring.”

Mark’s familiar smile was returning though his right eye still twitched with inner turmoil. He brushed the dust off of his sweater as he turned for the door. “Ya know, you should put that sermon of yours on a cereal box, Special K. It’s right outta Hallmark.”

Mark spun about, face red and eyes laser-focused in rage. “Don’t EVER use that name on me, understand? Oh, and this never happened, right?”

Fenton stared for many minutes after Mark’s departure. Those final sinister words echoed as sharp and loud as the clatter of the steel door. Fenton had encountered a lot of unsavory characters in his tenure as hero but had never had as strange an encounter as this. He had extended a helping hand to Mark and once again it was spit upon. He felt cheap. He felt used. But above all, he was befuddled. Yet he knew better than to tell a living soul about it.