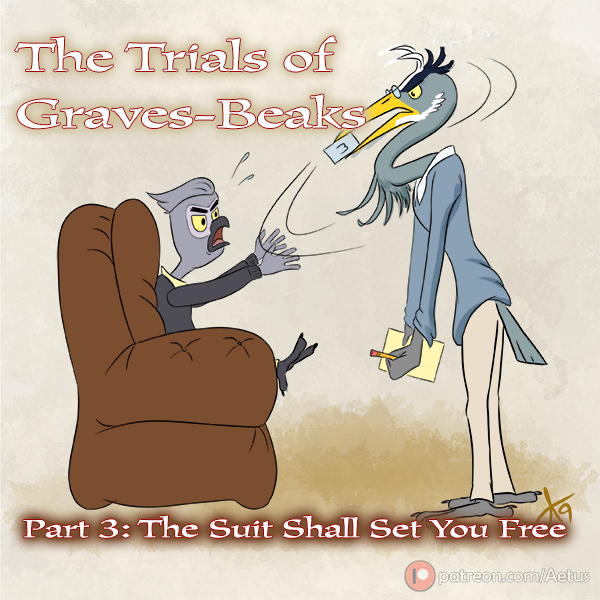 Dr. Sid Fisher glared down his beak through his spectacles. He sat in a soft leather recliner facing Mr. Beaks in a similar seat just a few feet away. “Please put the phone away, Mr. Beaks.”

“Just a second! I’m updating my status. Do you spell head shrink with a hyphen?”

The heron darted his beak and snatched the phone deftly from Mark’s fingers. In a flash he flicked his bill up and the phone slid down his throat and out of reach.

“Don’t worry, I’ll regurgitate it back for you after the session.”

“Eww! You can keep it. I’ll just pull out my spare—Hey!” Mark patted his empty pockets. “Oh yeah, Gravesie threw my other one into the bay on the way here. Geez all I did was take a video of his tail feathers while we were walking. It’s not like pornographic or anything. It would’ve went viral though for sure—“

Fisher beat his wings in the air. “Mr. Beaks! Can we please stay focused? You came to me for a reason. You told my secretary that you are experiencing recurring nightmares that interrupt your sleep. Please tell me more about these nightmares.”

Mark dropped his eyelids in annoyed boredom. “Ooookayyyy! So in the dreams I’ll be doing something cool like blowing up a helicopter or unveiling a new product—“

“YeAAAH! Duh! What else do mega-rich billionaires do on their private islands? Well, anyway, then stuff starts going wrong and before I know it, I’m drowning or burning or falling or about to die. And then…”

Sid scribbled along for a moment and then looked up over his glasses at Mark. Mark’s eyes were wet and his lower beak quivered.

“Mr. Beaks, it’s ok, take your time.” Sid folded his wings on his legal pad and ticked off the billable seconds in his mind.

Mark smiled as tears rolled down his cheeks. “Usually I wake up and there’s Gravesie hugging me. But sometimes I don’t wake up right away and the most amazing thing happens.”

“Waddle Duck shows up to save me.”

Sid removed his spectacles and wiped them with a cloth. “You are referring to the mechanical superhero suit that you appropriated a few months ago, correct? The one that almost blew up the entire town? What do they call him now? Gizmoduck?”

Mark wrinkled his cere. “Stupid name. Waddle Duck is way cooler. Might as well name it GizmoMcDuck since it’s all monopolized by Scrooge now.” Mark emphasized ‘monopolized’ with a mocking tone.

Sid dismissively wagged his beak. “Nevermind. That had to have been a very traumatic event for you. It’s no wonder that you might experience some post-traumatic stress. But I sense that there’s more to this. You mentioned that he rescues you. What else happens?”

Mark looked down and fidgeted with his sweater zipper. “Well, nothing really. He flies me away and…”

Sid waited a few profitable moments in silence, then tapped his pencil against the legal pad.

“You’re sworn to secrecy, right? So you have to carry whatever I say to your grave, right? Even if, say, a certain big hunk of a falcon were to pluck your feathers one at a time or break your gangly legs?”

Mark’s face lit up. “Cool, cool, cool. Well, we fly away and we land on top of Waddle HQ. I thank him for saving the most important bird in the world and he gives me some awesomely correct compliments. The sunset reflects off that dark shiny visor of his. Then he hugs me and starts taking off his suit.” Mark was looking down at the floor now. “But he never gets it off before I wake up.”

“How does that make you feel? That you don’t get to see what your savior really looks like?”

“Maybe you want him to be more? Maybe a romantic interest?”

“Fff… no.” Mark’s cheeks reddened and he giggled. “Not… really.”

“Be truthful, Mr. Beaks. It’s the only way I might be able to help.”

“Honestly I’m not sure what I expect in my dream. That suit is, huff… so hawt as it is. How much better could it get? Maybe that’s why I wake up because all I really want is that suit.”

Sid uncrossed his legs, then crossed them the other way. “Do you ever feel guilty?”

Mark narrowed his eyes and looked at a potted plant in the corner. “Guilty? Me? Pfft.”

“Guilty for desiring someone else besides the one that cuddles you when you wake up.”

Mark glared back and leaned forward. “You think I love a stupid suit that much? You’re the crazy one here.” Mark stood up and paced. “Falcon takes good care of me. Besides, Scrooge gets all the credit for that thing even though I’m the one that put it in the limelight!” He kicked the wastebasket sending Kleenexes and crumpled papers across the floor.

Sid stood and poked his beak into Mark’s chest. “Stop, Mr. Beaks!” He pressed his chest up close to Mark’s and pressed their foreheads together. “You’re avoiding the truth here, Mr. Beaks. Listen to yourself! You know what’s wrong and you have to face it. You’re infatuated with the suit. Is that so unusual? You love technology. Gizmoduck is popular. You like to be popular. He embodies everything you want—well, almost everything. Because you also feel guilty that it’s not Falcon that rescues you in your dreams, even though he loves you and you love him.”

Mark stared back blankly for a moment before tears welled up in his eyes. He sobbed and Dr. Fisher winged him a Kleenex and patted his back in a professional hug. “There, there, it’s good to let out your feelings, Mr. Beaks.” He mumbled lower, “Just don’t get snot on my sweater.”

After Mark cried for a few minutes, Sid sat him back down in a chair and took his own seat. “Listen, Mr. Beaks. I think it’s important that we set up a meeting between you and Gizmoduck. We can keep it private, secret. I think it would be therapeutic for you to interact with him more than you were able to before, when he was your employee or in a crisis. You two can have a nice quiet chat, Fenton can come out of the suit, and you can overlay new subconscious, mundane constructs to help ground the fantasies that keep replaying in your conscious mind.”

Mark blinked. “TLDR doc, you lost me after ‘meet Gizmoduck.’ Tweet it for me.”

“Remember, Mark, if I’m able to arrange this it will have to be super-secret. Tell NO ONE or the meeting is off.” A repetitive buzz and obnoxious ringtone full of airhorns and dubstep bass emanated from Sid’s gizzard. His eyes jangled and his wings reached out to balance himself. “Excuse me but I think you have a call. Are you sure you don’t want your phone back?”