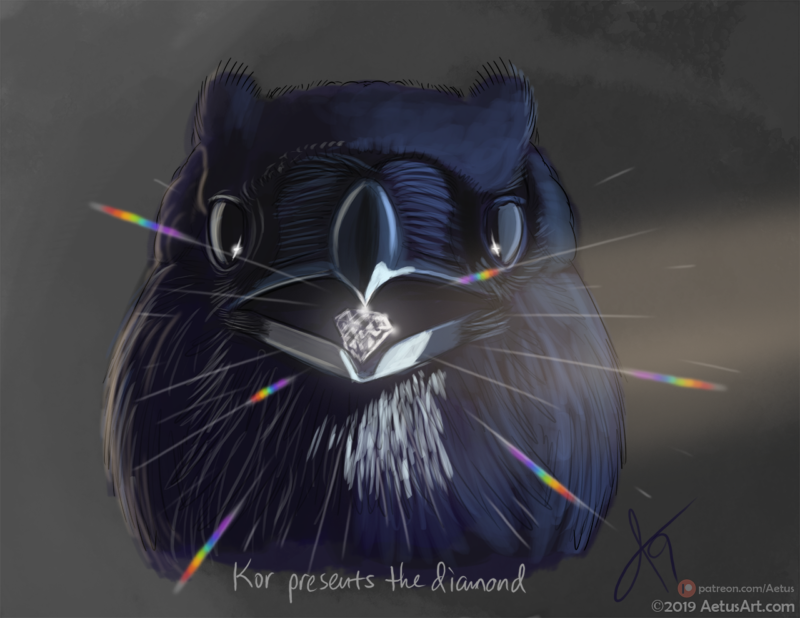 Whiterock is my next novel, aiming for release in 2020. I have it all written but it still needs polishing so I’m sharing it here, a bit at a time, to get your feedback. Have a quick read and tell me your impressions, or give me your critique, in the comment area below. I’m also attaching a pdf version (Whiterock-Gilded Banner-Chap 002 WIP) if you’d like to import it into your favorite electronic reader. Enjoy!

©2019 Hal Aetus (aetusart.com). Please do not repost without permission of the author.

WARNING: There are some scenes throughout this novel that depict actions some may not consider suitable for children such as drinking of alcohol, mild gore and violence (as in close combat), romance, and mild sexual content. My target audience is adult (e.g., 18 years or older) so be advised.

Pepro and Tristan were up before dawn, as was typical, building the fire in the forge and pulling out the materials to work on the orders for the day. But they had barely started when Kor flapped in to the front door. The sky was just turning the dark blue of dawn with the morning star high in the sky, the last of the lesser stars fading for the day.

“Pepro! Tristan! Stop what you’re doing and come here!” Pepro had been stomping a large wooden lever attached to a pie-piece shaped leather accordion. It was the bellows that forced a stream of fresh air straight into the bottom of the coals to heat them hot enough to melt metal. Tristan was 10 feet up the back shelves pulling out a strap of copper. The two looked at each other with a shrug, wondering what they’d done wrong.

Kor exclaimed, “No, don’t worry, I’m not displeased, just get your tails over here!” Tristan dropped down with a quiet flap and Pepro shuffled over from the forge to Kor. “I’ve got something fun for you two to do!”

Pepro and Tristan glanced at each other, wary of what Kor meant by “fun.” Kor saw their expressions but continued in a softer voice with a twinkle in his eye “No, really, boys, this is an adventure and I think that you’re ready for it!” At this they both relaxed and focused on Kor’s unusually quiet voice.

Kor went on. “Vasili is a very important patron and not just because he’s a king. He has been courting Miss Margarit, a beautiful white-tailed sea eagle from the north coast. You two have never seen her I’ll wager, but you’ve certainly heard of her. She’s the envy of every able eagle in this land!” Kor’s eyes rolled upwards and he fluttered his white third eyelids. His sooty throat feathers puffed out. “Caw-caw! Who wouldn’t want to be brooded by that intelligent, graceful, strapping hen!”

Kor sighed and regained his composure, “Vasili has won her heart and now he wants to tell everyone about it by having special bonding rings made for both of them. This is an old human custom, to forge bands of gold or some other precious glittery substance to demonstrate devotion to only one mate forever.” Kor poked his beak towards his sketches. “There’s what we’ll be making.”

Tristan and Pepro cocked their beaks and studied the drawings.

“I cannot think of a greater honor as a jeweler! But, as you have no doubt surmised, we have very little gold­­ certainly not enough to make the size of rings he requires.” Kor’s upper eyelids flattened and his ear tufts rose as determination took over his tone. “But Vasili is a well-paying customer! So I need you two to get your feathered butts out to Whiterock, out to the Eastern Cliffs, and trade for some gold!”

Pepro and Tristan looked at each other with wide eyes and smiling beaks. They both started in at the same time: “Master! Really? When do we go?”

Kor put his wings on the two birds “Stop! Stop! Stop! I’m not done yet! It will take you 2 days to fly there, if the winds favor. Pepro! I’m putting you in charge of navigating and protecting young master Tristan. Keep your eyes open and your wits sharp. Don’t let me down. Don’t let the King down!”

Kor turned to Tristan “You are my negotiator, Tristan. You will broker the deal with our gold supplier and bring the gold back with Pepro’s help. This could be dangerous. These lands are mostly safe but there are still those that would steal if they realized you had something valuable. Since you are an owl, you know, Tristan, to take special care to avoid unfamiliar ravens, crows, and other dayfolk. Pepro should be a good deterrent to most mischief but don’t take any chances. You two stick tight together and you should be ok. My contact in Whiterock will provide a place to stay.”

“Yes, master” Tristan said, standing straighter than usual, the trust of his master elevating his posture.

Kor cocked his head and looked Tristan up from his feet to his head. “Hmmf… that’s better, young bird. Remember that posture when you arrive in Whiterock. It’s a rough place, full of birds the likes you’ve never imagined. The peace is kept pretty well by Peacekeeper Brant, a black­backed gull and his flock of deputies. But they mostly just keep rowdy, salty birds from tearing each other apart. They won’t be able to protect you from being tricked out of your money and there are plenty of scams and ways to be plundered. Which brings us to the birds you’ll be looking for…”

Kor turned and walked to a corner of the room. He poked his beak into a knothole, probed around, then made a quick stabbing motion and swallowed something. Another moment and he pulled back his beak with a long leather case in his grasp. The case had leather loops on it, meant to be worn as a harness. He offered it to Pepro who took it in his left foot. “Be very careful with that. There are two separate, sealed letters in there. One should be taken to Madame Penelope. She is, shall we say, an old acquaintance.” Kor gave a smiling wink. “She is a very upscale magpie that owns a very nice boarding house and hotel. It’s near the center of town in a tall white ruin left by the humans. Her sign is an oak tree with a crescent moon. It’s called ‘The Avian Haven.’”

Tristan cocked his head and studied the case. “Master, may I ask what the letters are for?”

“If all goes well, Tristan, the first one, for Madame Penelope, will be your meal ticket. I hesitate to tell you too much about Penelope. Just treat her like the gracious, beautiful, fine lady that she is and you’ll be fine.”

“Ah, no. She will have housing for you and can help you find your way around town.” Kor’s eyes narrowed and his beak moved closer to Tristan’s face. “The one you’re looking for is a big, salty bag of feathers known as ‘Perry.’ He won’t be hard to find, provided he hasn’t drunken or copulated himself to death! He’s a wandering albatross­­ huge bird but harmless unless you stand in the way of his drink or the tails he’s chasing. And unless you’re offering your tail to him you’ll have trouble keeping his attention. That is, unless you show him this!”

Kor had picked up something else from his secret cache and in a little jerking motion of his head he produced it now from his gullet. He extended his tongue and on it was a pea-sized glittering crystal. The stone caught the light from the rising sun outside and threw small rainbows around the floor. Neither Pepro nor Tristan had seen anything like this before and their pupils constricted at the spectacle.

Pepro asked “What is it, master?”

Kor carefully set the stone on the sunlit table, his raven eyes sparkling as much as the stone. “The ancient humans called it a diamond and they went to great lengths to mine them from deep in the ground. They are very rare now, particularly one of this quality. This will get his attention for very special reasons. Once you have his attention, give him that second letter and make sure he reads it. It’s a secret note just for him.” Kor placed the diamond ring into the letter bag. He pulled out a few small copper coins from a drawer and dropped those in the bag as well. He stepped on the bag and pulled the thong, closing it tight and then extended it over Tristan’s head. “Hide this well under your feathers. It’s for just in case Penelope’s mood has cooled or you run into other incidentals. Spend it wisely. You should be able to hunt your own food on the way. I suggest that you get going soon. Pepro: You know your way as far as Sunrise Lake, right?”

“Yes sir! I used to live there.” replied Pepro excitedly.

Kor paused, cocked his head ever so slightly to the left and flicked his third eyelids. Curiosity fed by old rumors swirled through his raven mind.

Kor’s eyes cleared and his ear feathers erected slightly, “No, no! Pay attention! Stay there tonight in the spruce forests of the western hills. You’ll get some good thermals in the morning and can cross the lake and make it to the coast by tomorrow evening if the winds stay westerly.” Kor looked at his two apprentices, a whisp of concern in his eyes. He blinked it away and croaked “Don’t trust anyone else that you don’t know. If you do run into trouble, go to the deputies. Any questions?” He looked from beak to beak for a response.

“Sir, what if Perry doesn’t have gold or won’t sell it to us?” asked Tristan.

Kor looked him in the eyes, “A good question master Tristan but don’t worry. He will help us. You’ll see! And you can trust him completely especially on all matters concerning gold, just be careful with his social advice and don’t give him any valuables except the ring.”

“I think I understand, master. We’ll behave ourselves of course!”

Kor croaked back loudly, “Good! Fair winds to you both! Now blow on out of here! I have work to do!”

Pepro and Tristan watched Kor turn and sharply ignore them humming to himself as he walked towards the back of the hollow. They looked at each other, heads swirling with excitement like clouds of summer swallows. Tristan broke the momentary silence. “Well, I guess we’d better get going!”

Soon they were both climbing into the cool blue sky aiming East. Kor watched from one of the small window openings, a serious look on his face. He grunted to himself “Good luck, young ones. And have a good time.”