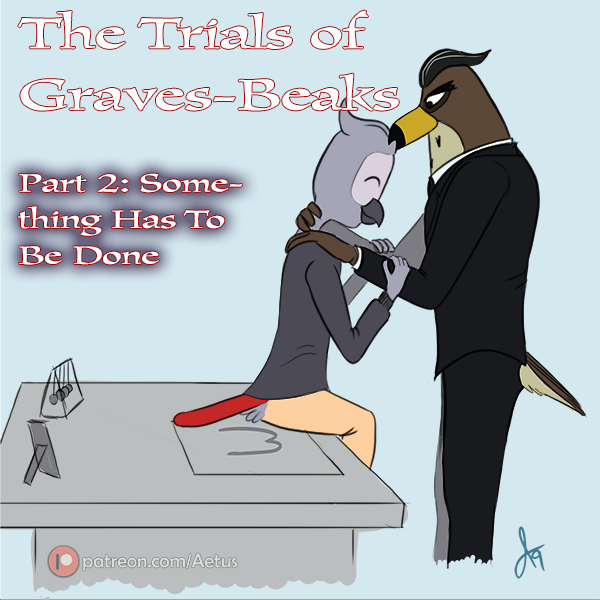 The next afternoon, after a busy morning of meetings and lunch at a chic café on the waterfront, Falcon and Mark were at their desks in Waddle headquarters. Lately, this had become the hardest time of day for Falcon. Sitting in his chair, his crop full, the coffee wearing off, and the slanting late-day sun blasting him, his eyes grew heavy and his attention span shrank. His boss, too, would usually be ticking away on his phone at his own desk but he was fast asleep, leaning back in his slim office chair with his feet up. The fitful dreams the night before followed by the long conversation and cuddles afterwards had taken their toll on Mark’s alertness.

Mark’s head was tilted back and his beak wide open in a soft chirpy snore. Falcon loved seeing him this way and smiled. He also loved how Mark’s delicate grey toes would curl and twitch while he dreamed. His boss was safe, it was ok to relax, just a little.

Suddenly, Falcon was jolted awake as Mark let out a shrill scream and fell out of his chair with a clatter. The effect was so electrifying that Falcon sprang out of his seat and landed on Mark’s desk before he was even fully aware of where he was or what was happening. He stared down through the bright beams of sunshine at Mark crying on the floor, the tears shining off his hands as he wiped his eyes. When those moist eyes looked up at Falcon, his heart cracked and his shoulders sagged. He hopped down and picked up his boss and snuggled him to his breast, hugging him tight.

Falcon stroked Mark’s back. “I’m so… sorry boss.” His huge palm cupped the back of Mark’s head and petted his feathers.

Mark’s sobbing slowed until his breathing became long and deep as he melted in Falcon’s arms. He hugged back with his puny arms. “It’s ok, Gravesie. It’s not your fault. You gotta believe me, it’s not your fault.”

After a few minutes of comforting, Falcon set Mark on his desk. Falcon glanced around, an instinct he never lost in any but the most private settings, and then leaned forward and laid his warm beak on Mark’s forehead, planting a sweet kiss.

Falcon whispered into Mark’s feathers, “I can’t protect you from your dreams. Please, boss, consider getting some help. Maybe a therapist?”

Mark sighed. “Way ahead of ya, big guy. See?” Mark held up his phone displaying a list of doctors in Duckburg.

Falcon frowned down the unfamiliar list of website and names and nodded. He cocked his head and smiled as he stroked Mark’s head feathers back into order. “Just remember to let me check out whomever you choose, ok?”

Mark hummed back “Mmmhmmm!” as his finger swiped down the list on his screen. In less than a minute he chirped “Here, this one!” and he held the phone for Graves to see. “Dr. Sid Fisher, psychiatrist, sleep therapist.” Mark swiveled the phone back and browsed further into the website while Falcon walked to the corner and poured a cup of coffee. He knew Mark wouldn’t want one as it was almost time for his 2:15 artisanal cold-pressed coffee that an intern was sure to deliver.

“OoooOOOOOooo! He has a big following on Twitter. And it says that he’s treated some of Duckburg’s most well-known people.”

Falcon chuckled as he walked back, cup in hand. “That’s my Beaksy, always attracted to the biggest Tweeter.”

Undaunted Mark poked his screen and connected a call to the doctor’s office. Mark’s head feathers wooshed and the phone disappeared from his hands, followed by a crunching sound. He looked up to see the glittering bits drain from Falcon’s thick fingers.

Falcon scowled, “What did I say?”

It wasn’t long before Falcon had checked his sources, internet and otherwise, and learned all he could about Dr. Fisher. He was a heron, 45 years old, studied at Calisota State, and according to the news and websites, he had many notable clients although confidentiality prevented any from being named. He supported charities including Change for Chicks and there were photos of him alongside Zan Owlson, Glomgold Industries’ temporary CEO during the time that Flintheart had disappeared. This proximity to Glomgold made the feathers on the back of Graves’ neck tingle. But since Flintheart had returned and Ms. Owlson had disappeared, Glomgold Industries was no longer involved in charities and probably didn’t rub shoulders with Fisher anymore. Falcon rubbed his neck and let his apprehensions pass.

Mark scheduled an appointment for that evening and soon the two of them were there together in the waiting room. It was situated in a three-story glass office building with a pointed front that jutted out over the rocky shoreline. The view was stunning with the wide blue sea swallowing the golden sun as evening descended. The sounds of softly crashing waves and gull cries wafted in through the windows on salt-laden air. Short shelves contained books about Yoga and meditation. There were smooth decorative stones and potted plants. Mark oogled it all while Graves stood firmly to the side, his eyes flitting about, impervious to the relaxing vibe.

A slender-built gull in a bulky beige Cardigan sweater walked in with a cup. “Your chai latte, Mr. Beaks. And Dr. Fisher is ready to see you now.”

Falcon grumbled under his beak, “Finally.”

Mark sipped his tea and the two began to follow the gull. She stopped and coolly turned towards Falcon. “Oh, sorry, Mr. uhhh…”

The gull blinked. “Right, Mr. Graves. Sorry, but this is a private consultation.”

“Sorry, Mr. Beaks, but Dr. Fisher insists that his initial consultations are with the client only. No spouses, no children, no family, no friends.”

Falcon squinted his eyes, his thick eyebrows rustling with concern. “That is unacceptable!”

The gull swung her beak around to Mark. “I’m sorry but Dr. Fisher is ever so stubborn about this policy. I guarantee you he won’t see you unless it’s alone.”

Mark turned to Graves with his big pale eyes glistening. “Listen, Gravesie, it’ll be ok. I’ll be right in there.”

Falcon peaked through the open door and saw the slender blue heron with spectacles waiting at his desk. He looked down at Mark and his hackles settled down again. “Very well. I’ll be waiting right here for you.”

Mark gave Falcon’s stout forearm a hug and then turned to go. Falcon quivered inside with frustration but managed to show Mark a small smile as was escorted in and the door closed.