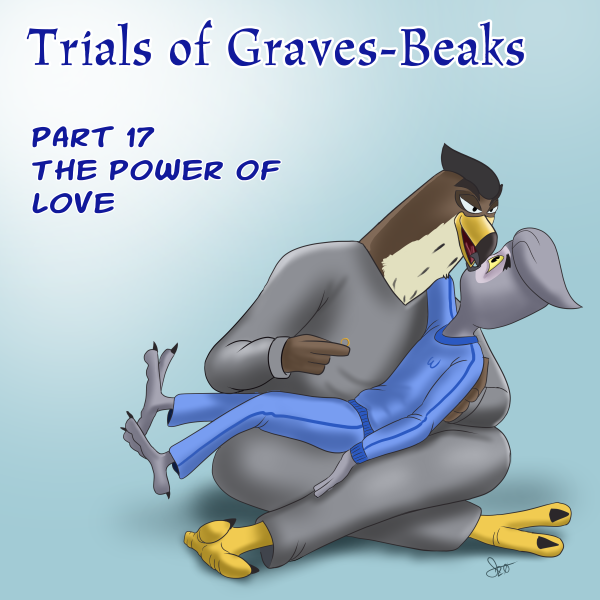 A few weeks later, back at Mark’s mansion on the hill, the sun was warm and the sky was blue. Inside the private gym, Falcon was lifting a small barbell with his left arm. He was sweating and his arm was shaking. Mark was standing in front of him, mimicking him with a much smaller barbell. Upbeat 80s-style synth music played from a radio on the shelf.

Falcon grunted. “Mark! Your weight is only a few ounces! Mine’s ten pounds!” Ten pounds, Falcon thought. I used to be able to do the same thing with 50 pounds and not break a sweat!

Falcon groaned and gave an uncharacteristic falcon whine of fatigue. His arm sagged and he dropped the barbell to the mat. “I’m done! My arm is killing me!”

Mark looked stricken. “Ooo! Ooo! Does it hurt?” Mark put his tiny weight down and grabbed an ice pack. “I can ice your shoulder! Or, or do you want some heat? Yeah, heat’s better, right?”

Falcon sighed and sat down on the floor. “Forget it!” He grabbed Mark by the waist and pulled him down across his lap and hugged him. “I got what I need right here.”

Mark’s boyish face lit up with adoration. He closed his eyes and the two kissed and caressed each other. After a few minutes of passionate beak slurps, Falcon pulled back with a sigh and a smile.

“I’ve been back here for almost two weeks and I… well, I just can’t get enough of you, Mark.”

Mark giggled, “Yeah, I know! But who’s complainin’?” He reached up and stroked Falcon’s cheek.

Falcon grasped Mark’s hand and locked eyes tenderly. “I want you to know, Mark, I don’t blame you.”

Mark sighed and started to look away.

“I love your attention and I don’t want it to stop. But I know you better than you think. You won’t admit it, hon, but guilt is eating you up inside.” Falcon leaned his face down and tapped beaks with Mark. “Really, Mark, it’s not your fault.” Falcon stroked Mark’s beak with a warm finger. “It. Is not. Your fault.”

Mark’s eyes quivered and teared. His smile became tense. Falcon pulled him closer into his fluffy chest and let him cry for a minute in his feathers. Mark sobbed and clutched at his feathers.

Falcon hugged Mark to himself and stroked his back like a sobbing child. His expression was one of love, though, and there was no impatience in his voice. “It’s ok, Mark, really. It doesn’t matter. I couldn’t leave you! I couldn’t let you face danger alone!” There was a crack in Falcon’s voice and his eyes were moist now too which made Mark sob all the louder.

“Glomgold Industries announced today that Flintheart Glomgold, the company’s founder, will be taking an extended leave of absence. It was just three weeks ago today that he was rescued from his own inventions by the combined efforts of Mark Beaks, CEO of Waddle, and McDuck Enterprises. Although charged with trespassing, Beaks and McDuck claimed to be averting a world takeover by experimental artificial intelligence running amok in Glomgold’s labs. Glomgold has denied these allegations until yesterday when new evidence was released to the media. The decrypted computer records showed that Glomgold did, in fact, appropriate trade secrets from Waddle. Hours later, Glomgold announced his vacation. In a related matter, there was also video that exonerated Mark Beaks of his alleged sexual encounter with Gizmoduck. Neither Waddle nor McDuck Enterprises has commented on the matter. Weather today is clear with a high in the 80s. Speaking of 80s, let’s get back to our Synthwave workout hour…“

Falcon stroked Mark’s head and whispered to him. “I’m glad you were able to get the evidence you needed to clear your name. Whatever happened to Ultima, anyway? How did you get rid of it?”

Mark pushed his beak further into Falcon’s fluff, burying his face in the warmth and musk of Falcon’s armpit. “Mmmphhmmmgg.”

“Maaaark?” Falcon put his beak against Mark’s ear. “We’re being honest with each other here. Aside from being your boyfriend, I’m also your corporate bodyguard. Just tell me that it’s not going to be a problem anymore.” He lifted his arm so Mark couldn’t mumble a non-answer.

“Well… I used ‘breadcrumbs’ to keep him… busy.”

“Yeah, little data files with enticing names to make him think they were important trade secrets. But they also triggered processes in his code that woke up his prime directive—a directive so secret that he didn’t even know what it was.”

Mark turned his head and looked up at Falcon with a smile on his beak. “I know it sounds silly, but it was love.”

Falcon’s beak opened a little and he didn’t know what to say. He so rarely encountered sentimentality in Mark, especially with technology.

“Oh, I know, Gravesie. I’m not the mushy type, except with you. I used to think love was a weakness, really. That’s why I built it in there as a means of control. But…” He wiped his swollen eyes. “I’m seeing things differently now.”

“So… you gave Ultima love?”

Mark wrapped his hands around Falcon’s warm hand. “Well, with Glomgold’s behavioral template in there, it was pretty messy, since that old fucker doesn’t love anyone. But his suuuuper greed made Ultima extra hungry to gobble all the files, trying to find satisfaction of that inner secret directive. He didn’t even know it was love or even what love was.”

Falcon mused for a moment that lots of people were like that. Maybe even Mark. Until now.

Mark continued, “I knew he wouldn’t trust me so I had to let him find the files without it being obvious I was giving them away. And I knew he would want to hack into Waddle so I made it just a little easier. When he decrypted the breadcrumbs, they combined to make Ultima more and more hungry for satisfaction. Finally, after he’d eaten enough, all I had to do was dangle the ‘carrot.’”

“Actually, it was a pet chicken. A chicken that loved him. And it laid eggs that hatched and made more chickens and they made more until all his defenses dropped and he was smothered in pointless, unconditional, blissful love.” Mark reached up and kissed Falcon on the beak.

Falcon kissed back but after a moment he pulled back slightly. He playfully fingered Mark’s chin. “You’re my little chicken, ya know. I can’t resist you. You drop all my defenses too.”

They kissed again then Mark pulled back a little. “I have something to confess though. I couldn’t destroy what Ultima had become. I mean, well, I could, but I didn’t want to. I captured his core code before it fragmented.”

“Oh don’t worry, Gravesie. I purged Glom-mold out of there. And all the defense stuff. He’s just a pure, innocent child now. I call him Boid. Maybe someday he could be our son.”

Falcon’s face warmed a little. But he wasn’t sure he liked the idea of a computer program as a son. And, yet, he noticed that Mark was talking about a serious future together. Serious enough that they would have offspring.

Mark saw Falcon’s eyebrows fluctuate as his brain calculated the meaning of his words. “I’d, ya know, have to build a little robot to put him in. But I learned a lot from checking out Gyro’s Lil Bulbs. I think it would work.”

Graves smiled and cleared his throat. He looked nervous all of a sudden.

Falcon hesitated and closed his eyes. When he opened them, they were glistening. “No, Mark. We can’t raise a child with how things are right now.”

Mark dropped one eyebrow and his beak frowned a little.

Falcon continued, “But I think we can fix that. There’s, uhh, something I’ve been needing to ask you. For a long time, actually. And the time is finally right.” He reached his hand under Mark’s tail.

Falcon’s hand rummaged in his sweatpants pocket a moment and came out holding something. He cleared his throat again and opened his hand. There was a handsome gold ring in his palm.

Graves picked up the ring in his fingers and held it up between them. “Mark, will you marry me?”

Mark smiled with open beak, his eyes welling up with loving tears. “Of course! Yes!” He threw his arms around Falcon’s neck and they kissed long and earnestly. Huey Lewis’ Power of Love started to play on the radio. The two didn’t notice though. They laid back on the floor embracing, lost in their own world of tender affection.