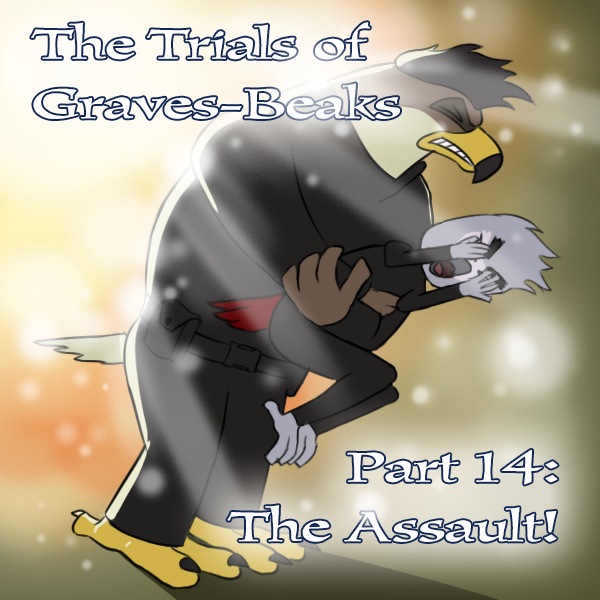 Having taken control of four more guard bots, Mark and Falcon made their way to the 45th floor. They decided against the elevators since Ultima could still control them directly. The lead bot, carrying Mark in its tentacle arms, set him down by the stairway access door.

Mark had managed to collect his pistol before leaving the shark pool room. He pulled it out from his tactical suit and cradled it in his hands for a moment. Just hours before, he stood at this same spot looking at the little pistol and drawing courage from the inscription on its side.

Mark held the pistol out, grip-first, for Falcon to take. “Here, Gravesie, take this. I’m a pretty crack shot, thanks to you, but you’re still the best. Here, take my ammo too. I’m gonna be too busy hacking to be shooting and I need you to cover me. Deal?”

Falcon took the gun and clips, heavy with bullets. He glanced at the inscription and smiled. He put his hand softly on Mark’s cheek, “You got it, boss. I’ll always have your back.”

Mark pushed forward and hugged Graves tight. Then he turned to the robots and said, “Robot minions!”

The lead bot’s Lil Bulb glared down at Mark with angry filament eyes and buzzed into a red glow.

The Lil Bulb turned yellow again and the bot straightened up, crossing its arms across its chest. The annoyed expression was still there though.

“Um, ok, brave and noble robot knights! You are the first wave. You go in and we’ll be right behind ya. Sorry no guns for you. But this door is bullet proof so just rip it off the hinges and use it as a shield. Graves here will take out the gun pods.”

“Uh, yeah, Gravesie. Machine gun pods, one on each side of the vault door about 30 meters up the hallway.”

Falcon knelt down next to Mark. “Show me.” Mark pulled out his spare phone and showed Graves the floorplan. “Mmmhmmm… I see. Those are Mark 4 Sentry-Trons. Very tough but they use visual sensors. First thing is we’ll pitch some of these smoke grenades in.”

Mark pointed to a couple of icons on the display, “I took those cameras out already.”

“Good, good. That helps a lot so the guns can’t use them as backups when we pop the smoke. Those pods will be wired directly into Ultima so I doubt you can hack them.”

Beaks frowned, “Yup. The bitch has those wrapped up tight.”

“And I can’t crack the armor on those things with these pistols. Their cameras have bullet-proof glass so I can’t even take those out.”

“What about a swarm of Lil Bulbs?”

Mark’s beak curled in a diabolical smile. His right eye twitched, just as it had that night with Gizmoduck when he snapped. He typed something into his phone.

Falcon frowned and lifted his right eyebrow. “Mark? I don’t like the look on your face. What are you–? No. Really?”

There was a crashing sound in the stairwell above them. Gizmoduck came bouncing down the stairs to them. He shouted out, “Never fear! Gizmo duck is—” He screeched to a halt when he saw Graves pointing a gun at him.

“Gravesie! Stop! He’s the only one that can help us!”

“What the hell, Mark! We only barely made up and you’re dragging him into this?”

Mark jumped in between Graves and Gizmoduck. He shakily faced Falcon down. “Easy, big fella. I’m over him, ok? You still don’t get it, ya big lunk. Of course not—I just figured it out myself! I was obsessed with being Waddleduck. I don’t care about Fenton or Gizmoduck. I just wanted to be a hero—as big and studly and amazing as you! You’re my hero, Gravesie.”

Falcon’s face fell. His big eyes quivered and moistened. He dropped his hand with the drawn pistol. He stifled a sob and pulled Mark to himself, giving him a tight one-armed hug and rubbing his back. “I don’t know what to even say.”

Mark pulled back slightly and gave a light mock-punch to Falcon’s chin. “Do the hero thing and bottle it all up inside for now. But later on, well, you can let it all out when we’re alone.”

Gizmoduck looked away and whistled awkwardly. The guard bots all crossed their arms on their chests and tapped their feet.

Mark and Graves, unphased, slowly pulled their beaks apart with a moist popping sound. They smiled at each other in their own world for a moment longer before straightening up and preparing for the assault.

Graves grimaced at Gizmoduck. “Gizmo, we need you to take out the gunpods down the hall to the right. They use bullet-proof cameras that are between the gun barrels. Take out those cameras anyway you can and then take the guns out. Then cover us against any other guards while Mark hacks into the vault. Got it?”

Mark and Graves moved behind Gizmo and all the robots lined up at the door. Mark shouted out, “Ready? Go!”

The lead bots grabbed the door and wrenched it one way, then the other. It popped off its hinges to the tune of snapping metal. They pressed into the hallway with the door in front of them and the gun pods blazed in a hail of bullets. Immediately one of the robots took a hit to its wheel and toppled exploding in a shower of sparks and flames as more bullet rattled into its torso. Another bot took its spot, picked up the door, and pressed the attack forward.

Falcon and Mark hurled two grenades into the hallway and they burst into a cloak of smoke. In short order the shooting stopped but they could hear the gun pods swiveling back and forth, searching hungrily for more confirmed targets.

Gizmo raced into the hallway, around the guard bots, and out through the front of the cloud of smoke. A pie struck the face of the righthand gun pod and it flailed in confusion. The left one commenced peppering Gizmoduck with bullets. One struck the exposed pie-throwing tentacle and it splintered into shards of tattered metal. Gizmo reeled back as his body lurched from the heavy ammunition strikes. Fenton’s visor flashed dire warnings. Although the bullets were bouncing off, they were weakening his armor with worrying speed.

Another hatch opened on Gizmo’s chest and a laser cannon blazed forth upon the gun pod. The bullet-proof camera cover melted and flowed down its face. It staggered and stopped shooting. Meanwhile, the other gun pod shook the last of the creamy pie debris from its face. It cocked its barrels and aimed at Gizmo’s head.

Mark and Falcon heard the pause and ran into the fray. Just as they emerged from the smoke the guns blazed in a stream of bullets that focused on Gizmo’s weakest area. But this wasn’t Fenton’s first tough encounter. He whirled and spun like a top, deflecting the bullets while working his way closer. When he was close enough, his shoulder blades popped out and sliced the gunpod from the ceiling. It fell into a smoking heap on the floor and went quiet except for the hissing of its hot barrels.

The silence was shattered by Mark’s agonized cry, “No! Nooo! Gravesie!”

Falcon was slumped against a wall slowly sliding to the floor. A pistol fell from his hand as his tail crumpled against the floor. His eyes were closed and his was beak was pale. There was a hole in his left breast and a growing stain of blood.

Mark knelt down and tugged at the fabric over the hole in Falcon’s chest. His fingers came back soaked in blood. He tore off his neck buff and stuffed it into the hole. “Gravesie! You’re gonna be ok. It’s just a flesh wound!”

Falcon weakly pushed Mark away and opened his weary eyes. “Oh no it’s not…” He took a ragged breath. “It penetrated my body armor…”

Falcon clenched his beak and huffed in pain. “Get on with the mission, boss. Go on! Save the world without me. I know you… can do it…” Graves slumped and went still.