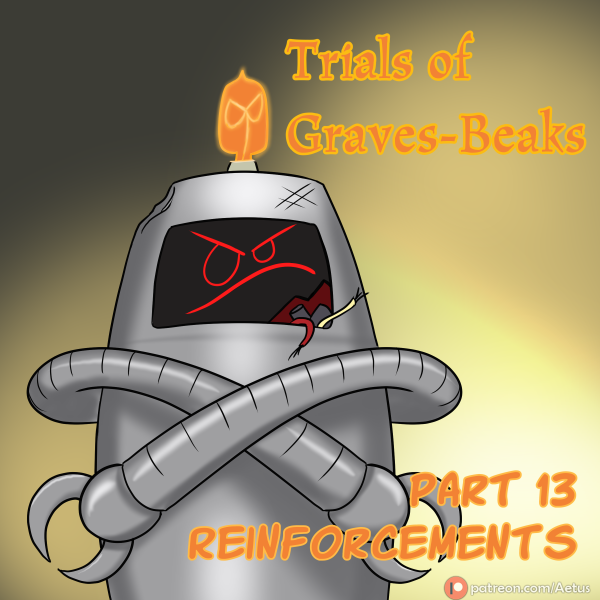 The massive doors crackled and popped. The hinges pinged and shot across the room. As the doors groaned their last suddenly the mass of mechanical tentacles stopped and withdrew back out of the room.

Falcon sucked in loudly through his beak and sagged his shoulders. “Phew!” Then he turned smiling towards Mark. “You did it!”

But Mark was still tinkering with the robot, his eyes squinting with concentration. “Hang on! Almost there!”

Mark looked at the ragged empty hole in the doors then cast a bewildered look at Falcon. “It’s not me!”

Crashing and breaking sounds came from the next room, growing with intensity. Falcon drew his gun and jogged over to the doors.

As Falcon peeked through the hole he shook his head. “I don’t believe it! They’re being attacked by thousands of light bulbs with arms and legs!”

Outside in the misty night, thousands of glowing red Lil Bulbs were scaling Glomgold Tower, pouring into ventilation ducts and crashing through windows. Inside the next room, the gangly Glomgold robots were running around, rolling on the floor, and flailing their arms, fruitlessly swatting at the swarms of tiny bots covering them like annoying insects. The Lil Bulbs were clawing out eyes, tearing open access panels, and climbing inside to tear them apart from the insides. Some of the Lil Bulbs saw Falcon’s face and marched towards him.

“Shit! They saw me and they’re coming!” Falcon backed up, pistol aimed at the hole in the door.

“No, Gravesie! You’ll just piss ‘em off and you don’t have enough bullets! Put the gun down.”

The first Lil Bulbs popped through the hole and marched towards the pair, their filaments glowing red and looking like pairs of angry eyes.

Mark laughed nervously, biting his lower beak. “There, there little guys. We’re all on the same team, right?”

One walked out in front and snapped to attention, giving Mark a smart salute.

Mark exhaled and smiled nervously. “See! I told ya!”

While Falcon holstered his weapon, Mark was rubbing his chin in thought. “Hmm… I’ve got an idea. Come here, little guy. I’ve got something for you to do.” Mark pointed into the slain robot’s head. “You’re getting a promotion! Take over this robot’s brain and tap into the robot mesh network to get a dozen more bots to obey us. We’re going to need some help breaking back into Ultima’s server room.”

Falcon walked over close “What? We’re not going up there. I need to get you outta here!”

“Gravesie, you’re a sexy hunk and I can’t wait to run away with you when this is all over. But this is waaay beyond you and me or clearing my reputation. Ultima has Glomgold’s crackpot ambition now and she’s going to enslave everyone. The only way to stop her is from the inside.”

Glomgold shouted and squirmed in his bonds. “Who you calling crackpot, sonny!”

Graves got down on a knee next to Mark. “OK, boss. What’s the plan?”

They looked down at the bot while the Lil Bulb climbed inside and starting plucking wires and pitching out bits of unneeded electronics.

Mark excitedly babbled on, “When I was hooked into Ultima’s control room earlier I planted a virus that I knew she’d detect and disinfect. But it was meant to tantalize her and make her curious for more. So I made her some special ‘cookies,’ yummy-looking files that had clues that would lead her to Waddle’s network.”

Falcon scratched his head and gave a confused look. “You let her hack into Waddle?”

“Yes! But I’ve tainted the files she’s grabbing with bits of code that react with each other and addict her more. It’s like digital crack. And I handicapped our servers to take her into directory dead-ends and slow her down so she’s more vulnerable.”

The robot twitched and beeped.

“It’s booting back up!” Mark turned to Falcon. “Here’s the thing, she practically let me into her server vault earlier. She wanted me to connect so she could get my credentials and hack into Waddle. Now that she’s locked down, it won’t be so easy to get back in there. It’s gonna be guns-ablazin’ and dodging bullets while I bust down the door with my supreme hacking skills!” Mark excitedly chopped the air with his hands.

Mark looked up at Glomgold. “I had no idea that Glom-mold had screwed up Ultima with his bullshit. But I think it’s actually helping. She was glitching big time. I think her amped up ambition is clouding her strategic processing and she’s becoming just as unstable as that old fool.”

Flintheart clenched his beak and quivered in rage. “Come ‘ere you lil drol. I’ll show ya who’s a fool!”

The guard robot stood up and wobbled. The Lil Bulb’s head glowed from a new hole in the top of the robot. It made an angry, crackling beep and lurched forward to the doors and shoved them open.

Mark stretched his arms open in triumph. “Awesome! We’ll get a squad of robots and go kick Ultima’s ass!”

Falcon smiled with pride in his eyes. “Did I ever tell you how amazing you are, Mark?”

Mark dropped his eyelids half way and gave a bedroom smile. “All the time when we’re all alone.”

Falcon blushed and snickered. He stood up and followed behind Mark, who was excitedly skipping along to keep up with the robot. Before he slipped back into his bodyguard mindset, he thought briefly to himself about how much he loved Mark. He admired his smarts and his playful smugness made him laugh. He was a self-absorbed, self-promoter, yes. But Falcon knew that there was more under that. Drives that Beaks himself probably wouldn’t acknowledge out loud. He’d risked his life just to get Falcon back. Falcon’s heart fluttered at that realization and he knew he’d never doubt Mark’s love again.