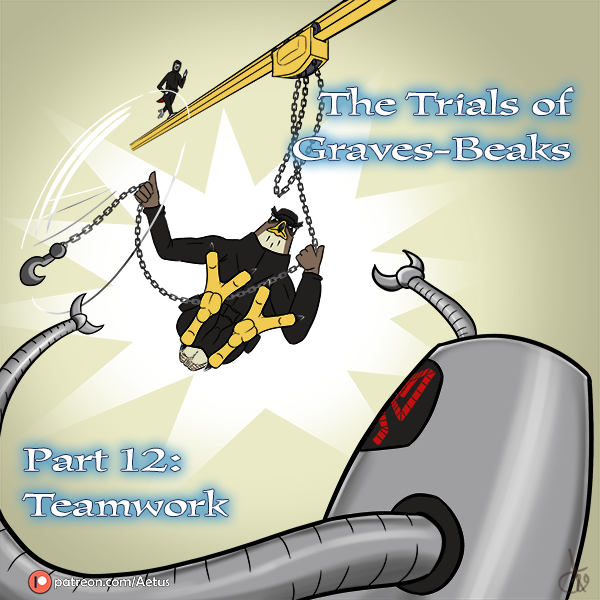 A deep dull thud reverberated through the walls and all the lights winked out. Mark opened his eyes as emergency lights flickered to life in the corners of the room. The sharks were lying still down at the bottom of the pool cowering from the odd vibrations. The hoists ground to a halt and the assembly machinery in the next room groaned to a stop. All went dead still.

Mark looked around the dim room slowly. “I don’t know… but I’m not waiting around to find ou–!” Suddenly he felt a warm hand across his mouth and another giving one of his cuffed hands a warm, reassuring grip. The scent on the fingers was of feathers and manliness. Mark looked up and saw a broad-shouldered shadowy figure smiling down on him. Falcon!

Falcon held up a finger to his beak in a shushing motion as he pulled his hand away from Mark’s beak. Mark’s eyes teared up as Falcon gripped his arm, opened the hoist’s hook, and pulled him up onto the I-beam with him. They hugged close and Falcon rubbed Mark’s back. Mark could barely contain himself as buried his beak and stifled his sobs in Falcon’s chest fluff.

Falcon put his beak close to Mark’s ear and whispered, “Are you hurt? Can you follow me out?”

Falcon smiled and said, “Yes. It’ll always be me, Mark.” He hugged Mark close. “But you’ve got to focus and follow my lead. So, I’ll ask again, are you ok?”

Mark nodded, “Yes, I’m fine. But we’ve got to stop Ultima. She’s gone off the rails and is making an army, thanks to that nasty old fart.” Mark’s whispering sharpened over the last phrase and he shot a glare over at Glomgold.

“What’s that whisperin’? Are you talkin’ to yerself?” Glomgold wiggled and slowly turned. “Whaaa? Where are ya laddie? Don’t leave without yer ol’ friend!” Flintheart looked up and saw the two dark figures on the I-beam. “How’d you get out? I demand—!”

Mark shot back “Shut up you old fool or we’ll leave you here!”

Mark whispered to Falcon, “How’d you get in here?”

Falcon glanced up at an open ventilation duct above. “Remote detonated explosive to cut power to this floor and disable security. It’s only a matter of time before a backup power grid kicks in.”

“But!” Mark’s forehead creased in confusion. “How did you know?”

“There’s a little love affair between McDuck’s janitor and Kurt, your Sno-Cone vendor. Fortunately, for you, they shared some pillow talk and then Kurt tipped me off.”

Mark rubbed his lower beak with his fingers. “Hmm… I might have to give that kid a promotion.”

The robot guard below still had glowing red eyes but was staring off into a wall. Mark whispered to Falcon, “Must be confusing the guards too. Let’s get out of here. What about that sack of droppings?”

Falcon walked along the I-beam with the balance and silence of a cat. Mark followed. He bent down over Glomgold’s hoist and ripped out a wire. He whispered to Mark, “His hoist won’t move, even when the power comes back. He should be ok and we won’t have to deal with him. Let’s go!”

Falcon and Mark climbed up the supporting struts towards the ceiling vent.

Flintheart saw them leaving and shouted out, “Wait a minute! You’re not leaving me here are ya?” He tried to move his fists in rage but just jostled and clanked around in his bonds. “Stop! You’ll rue the day you leave ol’ Flinty behind! I’m warnin’ ya!”

Falcon curled his fingers around the lip of the ventilation opening when a siren blared and the edge Falcon was grasping moved. He let go as a fire door slammed shut across the duct.

Falcon groaned. “Damn! We’re not getting out that way.”

Mark yelled over the blaring siren, “The doors just shut too!”

“They must all be tied together with the fire alarm system. Ultima has us cornered! Stay here!” Falcon ran down the I-beam, jumped, and grabbed onto the hoist that had been holding Mark. His momentum propelled the hoist down the I-beam track while the robot below was swiveling to respond. He gathered up a loop of chain with the hook at the end and whirled it around like a Medieval mace. The robot extended its gangly arms just in time to get a faceful of metal. The 10-pound hook crashed through the robot’s face panel in a shower of sparks. It toppled to the ground twitching.

Falcon didn’t stop. He dropped down and dragged the chain quickly over to the doors. He wrapped it around the door handles several times and fastened the hook back to the chain. As he finished up he turned to see Mark was standing right above him on the I-beam, his smile wide and his eyes glistening with pride.

Falcon smirked and growled out “I thought I told you stay put.”

“You know I love it when you tell me what to do, Gravesie. But we’ve been split up too much lately, don’t ya think?”

Falcon harrumphed in a half chuckle and held out his arms. “Jump down, I’ll catch you.”

Mark didn’t hesitate as he stepped off and dropped into Falcon’s arms. Falcon let out a small grunt but before he could catch his breath, Mark was wrapping his arms around the big bird’s thick neck and laying a beak kiss on him. His first reaction was to stumble back in shock but Mark didn’t let go. Falcon relaxed and pulled Mark closer. They locked beaks and sighed as they enjoyed the overdue taste of each other’s tongues.

After a moment there was a shove at the door and a flutter of the handles.

The two lovers pulled their faces away and looked towards the sound. The doors bucked violently under the force of metallic fists punching on the other side.

Falcon set Mark down. “Stay behind me. I’ll defend you as long as I can. If you see a chance to escape, just run. Don’t stay for me—just get out.”

Mark rolled his eyes and smiled. “You know I love you you big, romantic bird hunk. But that’s not gonna happen.”

“Mark! Don’t argue! You won’t stand a chance against them. It’s my job to protect you no matter what.”

Mark looked up at Falcon with his optimistic yellow eyes. “We’re a team now so you do what you do best and hold off those guards while I hotwire this pile of junk and see if I can save our asses.”

Falcon’s beak dropped open a little and his eyes narrowed as he processed the situation. He wasn’t used to relying on others in situations of this kind. Or really even stopping to think in the face of danger. It was usually just his muscles and finely honed instincts that drove him to slash and punch his way out of a scrape. To Falcon, Mark had looked like a frail gray twig about to be snapped to a million pieces. But in that moment, Mark became strong. He wasn’t just a package or client to protect—dead weight to drag out of danger. Instead, Mark was an asset. For the first time Falcon felt like he needed to rely on someone else to save him.

As Mark spun around and tore open the fallen robot’s head, he was calm, smiling, like he was as at home with this task as a bird was at home in the sky. Falcon sighed and felt his head feathers prickle with pride for his mate.

But then his attention was jerked away by the doors bucking again and the chain rattling and banging against the door. The robots had stopped punching and had formed a chain of themselves to pull the doors outwards. They had opened a gap wide enough so that their tendril arms were probing inside and working on the chain around the door handles.

Falcon grabbed a heavy bar from the floor and battered the reaching metal hands. After smacking away the first few hands he jammed the pointed end of the bar through the opening and struck the face of one of the robots. It erupted in sparks and collapsed back, breaking the mechanized tug-of-war for a few more critical seconds.

Falcon looked over his shoulders. There were blinking lights and wires dangling from the robot’s smashed head. Mark was humming to himself as he pulled out a shiny new phone from his tactical suit and began tapping away.

A mighty groan pulled Falcon’s attention back to the doors. The robots gave a mighty tug and the gap reopened wider than ever. Falcon worked at battering the arms again but there were too many of them this time, protecting each other like strands in a cable while the deepest hands worked on the chain. Then three of the hands grabbed the bar and shook it back and forth.

Falcon was flung against the door and flung from his grip on the bar like a rag doll. He stood back up, panting and gripping his bruised ribcage. His eyes widened into saucers as a tangled mass of metal arms roiled through the gap and pulled the doors outward with snaps and groans.

“Mark! They’re through! Please tell me you have something! Marrrk!”