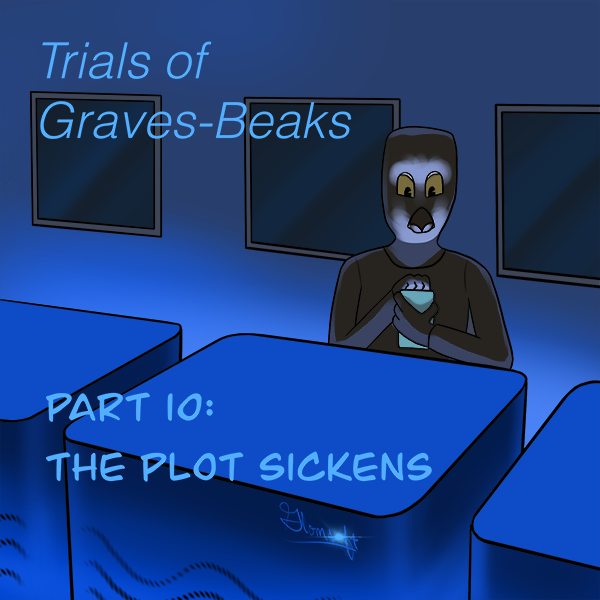 “Access granted!” came a feminine robotic reply from the door. The gun pods relaxed and spun back to their default positions pointed down the hallway. Mark wiped his sweaty brow with a hand and stowed his pistol. For what seemed like entirely too long the door hissed and clicked as overly complicated mechanisms released and the door slowly whirred opened. Mark yawned from boredom by the time it was open enough to slip through.

Once inside, the door slammed shut behind Mark and the robotic voice gracefully instructed him to remain still for a “harmless biometric scan.” Blue and red lasers fluttered across his body. The space he had entered was small but had a thick, transparent door that faced into a room full of rows of network servers with blinking lights and whirring fans. There was a keypad mounted next to the doorway.

The laser sweep ceased and the voice feminine voice spoke again. “Welcome, Mark Beaks. Please verify your credentials.” This was a bit out of the order that he expected but he was anxious to get in so he tapped out a long password on the console before him. There was a pause and then the computer intoned again, “Welcome Mark Beaks. Please verify your credentialszzzzz.” The lights flickered at the glitched ending of the command. Mark raised one eyebrow and poised his fingers to type them in again when suddenly the computer responded, “Thank you! You may enter.” The lock on the door clicked and a light on the handle turned green.

Mark opened the door and spoke quietly to his in-suit communicator: “I’m in the server vault. Are you ready on your end?”

Back in his underwater research lab, Gyro sat poised at a computer screen with a headset on. “We’re all set to start our hacking software and download the files the moment we have access. Fenton is here too.”

Mark pulled out a patch cable and connected his smartphone to one of the blinking server interfaces. He gave a few taps. A few chirps from his phone and streams of numbers and file names began flying down his screen. A box popped up in the center that read Access granted. Mark giggled, “We’re in! Go for it!”

Gyro tapped some keys and said calmly. “Confirmed. We’re in. Hmm… don’t you think that was a little too easy?”

Mark frowned. “Easy! Easy?! I almost got my butt blown off!”

Mark tapped the secure transceiver under his mask. “Hello? Hello?” Crap. I’ve lost voice contact. He checked the phone connection. A red box read “Connection lost.” Mark tapped and swiped frantically on his phone screen but nothing was responding.

Mark almost dropped his phone. His glistening eyes looked up at the speakers then around the room. “Falcon? Is that you?”

Scattered monitors on the wall lit up with a close-up image of Falcon. “I’m so disappointed in you, Mr. Beaks. Breaking and entering is a serious charge, and way beneath even you.”

“Save it for the police! They’re on their way now.”

Red lights began throbbing in the corners of the room and Mark could hear alarms in the hallway.

“You work for Glomgold? How could…?” Mark’s eyes widened and teared up. He shook his head. “No! You stole Ultima!”

Falcon smiled and laughed heartily. As he laughed another familiar laugh joined his. A twisted, evil laugh wrapped in a Scottish brogue. “Bless me bagpipes! Yer plan worked perrrfectly laddie!” The camera view zoomed out and there was Falcon sitting close together with Glomgold in a foamy hot tub sipping champagne.

Mark sagged to his knees and tears streamed down his cheeks. “It can’t be! You loved me!”

Falcon pointed at Mark too and gripped his belly as he bellowed with laughter. After a moment of evil cackling, he paused and giggled back, “I-I was working with Glomgold – ha ha – long before you hired me. I never loved you, Mark. You just had something we needed. Oh, and thanks for the fun times though you’re nothing like ol’ Flinty.” The two moved closer together and slipped tongue to each other through their pursed beaks.

“Nooooooo!” Mark felt ill and gagged as he watched. He dropped his phone and it bounced away. He didn’t care. His eyes blurred with tears and he collapsed on the floor sobbing. Flintheart and Falcon stopped kissing and laughed down at Mark again. His face flushed and he held his hands over his ears and closed his eyes against the horror on the screen.

In the chaos of his shattered ego, Mark remembered the pistol in his pocked. He pulled it out and studied it again. His finger stroked the inscription FG©MB. He choked and sobbed out “You loved me! And I still love you! This can’t be… This can’t be real!” The laughter from Glomgold and Falcon intensified as gas hissed in from overhead vents and the world started spinning. Mark’s sobs slowly faded into snores and he sagged face down in a pool of tears. His fingers weakened and the gun fell to the floor.

Somewhere in the mists the laughter stopped and the door opened. The red lights returned to their normal blue glow as two tall robots with wheeled feet and gangly arms whirred into the room. They picked up the limp form of Mark Beaks from the floor, bound his wrists and ankles in cuffs and glided back out into the hallway.