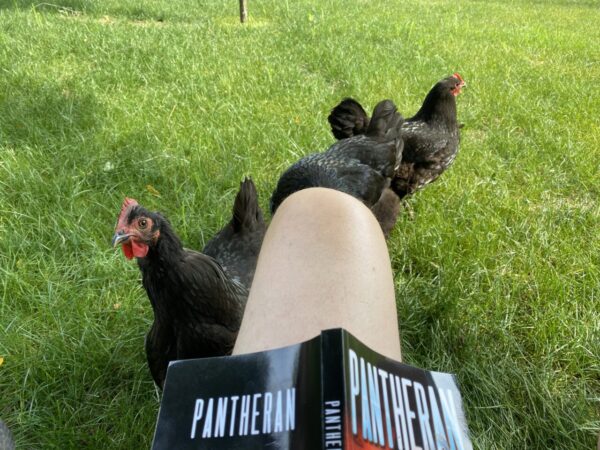 This final book in the Koinobi Trilogy takes place entirely on the Pantheran home world or in their space ships. It’s a pretty deep dive into a society of large felid humanoids through the eyes of David, a human who was exchanged for one of the Pantherans in Book 1. Fortunately he’s an intelligent guy and is able to learn their language and most of their basic rules of society. However, he’s also a bit too compassionate to comply with the complex ethics of the Pantherans, and they are too rigidly entrenched in their world view to entertain human values. He makes some huge mistakes that send tremors through the relatively fragile glue that holds Pantheran society together. It’s so radical that he even alienates those that had come to befriend and respect him. But, there’s a pretty amazing wrap-up at the end that leaves you with hope for their future.

I found the Pantheran society to be unexpectedly complex. It started out seeming pretty simple on the surface, but through David’s foibles in diplomacy, we uncover more and more layers to it, and even see a case wherein saving the lives of his friends against criminals, actually erodes the respect the Pantherans had for him. Reid handles this extremely well and works things out in ways you don’t expect without making it confusing.

My only squawks are that, as with the other books, there are times of high action where the writing gets hard to follow. There are also typos and clumsy sentences, seeming to come in clusters. It makes the reading a little harder at times, but then smooths out again. I think that an editor or a few beta readers would have helped straightened those parts out very nicely. It didn’t keep me from reading the entire book in pretty short order.

The other squawk is that I wish there was a bit more time at the end suggesting what happens next. I think I understand why it ends on a dramatic note and leaves the future untold, but the natural consequence is leaving a reader wanting more. I guess that’s the mark of a good book though! There could easily be another book but it would probably be mostly anti-climactic. If Reid reads this, though, I’d love to see a bit more about how things work out on the Aquilan side. It seems to me that their space command will still need a lot of convincing to establish trade with humans who seem to be influenced by a Koinobi. And they will have a long, long way to go to accept Pantherans as partners. I think that Dr. Abernathy could have a lot of interesting adventures too, as a veterinarian. Hmm… perhaps I should write a bit of fan fiction in that regard…

All in all, a good read and a very interesting world that Reid built in this book. I’d love to see more!

If you read this book, let’s discuss it! You can comment here or respond to my review on GoodReads.