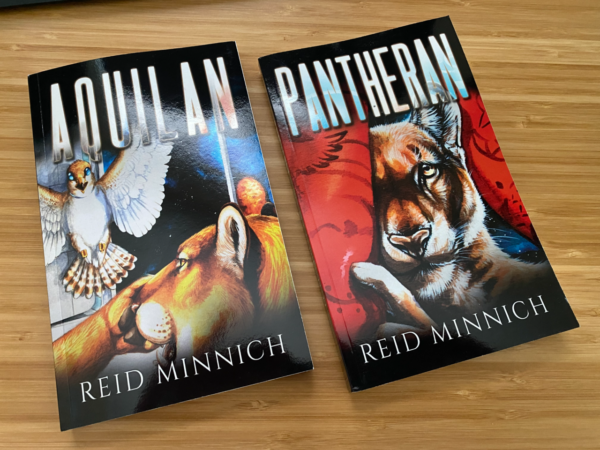 ALERT: THERE ARE A FEW MINOR SPOILERS IN THIS REVIEW!

This was a great read. You get to see Aquilans (avian aliens) and a Pantheran (felid humanoids) as they interact with rural American society. It’s mostly positive but, as you would expect, there are some who are irrationally afraid or seek to make a profit from the alien visitors. There’s also a particular Aquilan who cannot overcome her distrust of Koinobi, or disdain for humans, and it costs her dearly. It culminates on a good note though with a pretty moving standoff wherein humans defend and befriend the Aquilans and Pantheran. It ends with the first stages forged of a mutually beneficial alliance with the avians.

This book takes place entirely on Earth so it’s much easier to fill in detail gaps, as I had reported being present in Koinobi. During periods of high action, it gets a little hard to follow who’s doing what. But mostly it’s smooth reading.

There’s a subplot where in a local, underprivileged, young dreamer seeks out the Aquilans after seeing them cause a ruckus at an Asian grocery store (getting fish). He gets their attention by strapping a communicator they lost to a balloon, which seems very unlikely to work. If I were the kid, I’d have pestered the Asian grocery store owner to get in touch with them through Mike and Kindra, passing the communicator that way.

I actually loved the avian captain, Narete, despite her inflexible hatred. I would have liked to see her show more rationality and come around to at least some measure of respect of the others, if not trust. Her creative curses were humorous and, as an avian veterinarian myself, I really enjoyed the scenes where she was being treated by a veterinarian and coping with examinations and treatments. If I were to venture what disease she had, it would likely be fungal airsacculitis (e.g., aspergillosis), which is a common, and often deadly, malady of birds of prey. And, oh my gods… the veterinarian leaves at the end for the Aquilan home world to help advance their state of medicine. That would be a dream come true!

Of the three books, this is my favorite, but that’s because it concentrated on the avians and, well, I’m pretty biased towards birds! 😀

If you read this book, let’s discuss it! You can comment here or respond to my review on GoodReads.