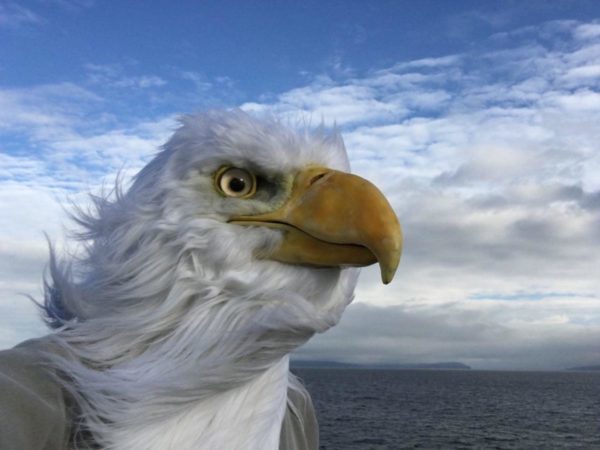 This is reposted with permission from Thurston Howl Publishing and appeared in their newsletter of January, 2019:

What’s your take on the transformation sub-genre? What draws you to it? Will you write more of it?

Since my first days of watching birds when I was 13 years old, I’ve dreamed of how it would be to slowly turn into one. Slowing the process down in my mind allowed me to see the details and consider how I’d live afterwards, if I still had human thoughts and memories. It made me consider what I’d gain and what I’d lose. There’s some good transformation art and stories out there but usually it focuses on an immediate, magical reward.There’s nothing wrong with that but my pragmatic mind wanted something more realistic. Working closely with birds for over 30 years, including several eagles, I’ve been privileged to have a rare peek into their world, their personalities, and the intimate details of their lives that don’t get written very often. I wrote those glimpses into this story to help the reader not only experience the transformation but, hopefully also gain an appreciation for how birds see, feel and maybe even think. I know for sure that I will continue to write stories that delve into the private thought-life of birds. I have two on the horizon that involve sapient birds (that is,those with human-level intellect and speech) and one that is, essentially, a one-year ride-along with an adult bald eagle in southeast Alaska.You get to experience his thoughts and dreams, his drives and challenges– all the little details of his life, season-by-season, for one year.

Why avlans? What about them fascinates you?

Like I mentioned above, I’ve wanted to be a bird since I was 13 years old. That’s when I first realized just how cool birds were. It was partly for their flight and the apparently “free” lifestyle they live, but also so I could experience their very different view of the world. For eagles, as we see in The Sky Calls, it’s a top-down view where height is safety-completely opposite from us! The walls, fences, canyons, and rivers that are barriers to us are to eagles just a part of the skyscape that shapes the wind, sculpts bubbles of warm air for soaring, or funnels prey in for good hunting. Their eyes see a multitude more colors and in finer detail than we can imagine. Their sense of smell and taste are dulled compared to us yet they are passionate about their food. And although most birds can’t solve math problems, they do have a sense of individuality with personal preferences and even dreams (it’s pretty amazing to hear an eagle shift in its sleep as though dreaming). And they carry all they need with them-perfectly suited to their roaming lifestyle.

How did you feelworkingwith THP to get this work out?

THP has been a great break for a first-time author. They hooked me up with a good structural editor and I didn’t have to shell out money I didn’t have. They moved the book along through all the steps that I didn’t know existed. So,yeah,it was a good experience.

What are your plans for future projects? Anything currently In the works?

I have written the first volume of a series called Whiterock that I hope to release in about a year. It will most likely have 2 volumes, maybe more if the characters continue to run away with my imagination! It takes place a thousand or so years after human civilization collapses in a world that has largely recovered from ecological disaster. There are large communities of feral birds who, through a period known as the Awakening, which occurred around the same time as mankind’s fall, have gained sapience and have built their own nations upon the ruins of the old world. After many years of struggle, an equal society has been achieved where birds of different species and background work together for a stronger community. But the peace is fragile as we learn when we follow a small band of friends that stumble into a decades old blood feud that threatens to tear the world apart.

Another project, mentioned earlier, is the collection of stories involving a wild bald eagle in the present-day world that I plan to condense into a book. And beyond that, another longer term book project that involves a highly advanced avian-like species from another world that may be mankind’s last hope in a dire situation. The tricky part is overcoming their isolationism and well-earned mistrust of other species. More on that later.

Seeing that you also deal inn artwork as well, do you find the two mediums help compliment one another in your own personal work?

Yes, they certainly can. More often I find that my art inspires me to write short stories about the scene or the characters. Sometimes I also work the other way and sketch some of my written characters and their world in order to stimulate my imagination further. It has practical value in showing impracticalities and inconsistencies that I hadn’t noticed while writing. I haven’t created any art involving characters in The Sky Calls yet, aside from the cover (which Is a merging of art and photos I took). A bit of trivia:The golden eagle In the cover image Is a bird that I handled once years ago. He was partially blinded, from chickhood, by West Nile Virus. Because he couldn’t survive in the wild, he was raised by people and, so, was very calm and tame around people. His eyes had such a lovely shade of gold that I couldn’t resist taking a close up photo while he was on my arm. Wonderful bird.

The Sky Calls is now available on the THP website, Amazon, or directly from the author (including signed copies).